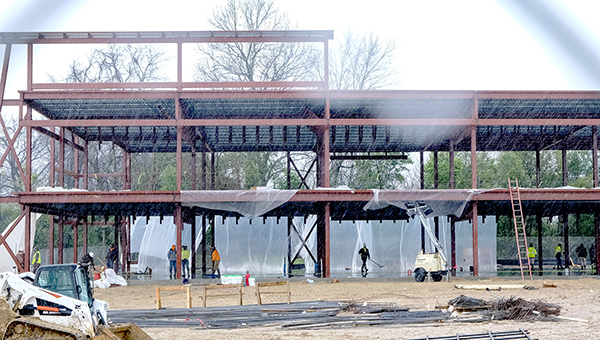 Workers are seen working on what will become the new campus for the Academy of Innovation at the intersection of Mission 66 and Rosa A. Temple Drive. (Courtland Wells/The Vicksburg Post)

“Some have been over, some have been under, but we’re still retaining contingencies in the overall project so that things are going to come up and you have that safety valve in your budget and doing what you told the community you were going to do,” said Gary Bailey, who is managing the project for Dale Bailey Architects.

Warren County voters in 2018 approved an $83 million bond referendum to help finance a $131.5 million facilities plan for repairs, renovation and expansions at each of the district’s 13 schools and the construction of one new building.

The bond issue, the first for the school district in more than 50 years, passed with 68.6 percent of the vote. It is being repaid through a 7.9 mill property tax increase.

In a related matter, Brookhaven contractor Paul Jackson & Sons, which has several ongoing projects with the school district, was awarded a $5.144 million bid to do additions and renovations to Bowmar Elementary School on Bowmar Avenue.

The bid, Bailey said, “Is right at our budget and keeps us overall within budget, and that was the one that we were the most worried about in the entire bid process, but it came in very good, very competitive.”

Through the project, he said, Bowmar will undergo a major renovation.

“Additional classrooms; we’re taking the library and making two classrooms, we will remove all the trailers (being used for classrooms),” Bailey said.

The bid includes a $344,000 project to renovate the building’s steel windows.

“The (state) Department of Archives and History is requiring us to keep those windows because this is a historic building,” he said. “They’re in terrible shape, but it’s essential that they be done now before we repair the interior of the classrooms of the buildings.”

Built in 1939, Bowmar Elementary was designed by noted architects A. Hayes Town of Baton Rouge, La., and N.W. Overstreet of Jackson. It is listed as a Mississippi Historic Landmark.

Bailey said action on an alternate project to renovate the exterior skin of the building was being withheld because the project architect has applied for a grant from Archives and History to pay for the work. He said word on the grant was expected in the fall.

In another matter, the trustees approved a $108,669 change order on the Vicksburg High School project to remove 45,000 square feet of asbestos tile that was not identified by the consultant hired to assess the school for asbestos contamination.

“It has to be taken care of,” Bailey said, adding the tiles were covered by another set of tiles. It cannot be covered again, he said.

“This is the worst-case scenario, and I’ll be talking to you later with counsel about that asbestos consultant,” he said.

In other action, the trustees:

• Approved a $380,120 bid from Live Oak Construction to do Phase II of the work at Beechwood Elementary School to complete work on ceilings and floors.

• Approved an additional project to install sidewalks at Beechwood totaling $33,401.

• Were told the projects for Warrenton and Redwood Elementary schools were going out for bids.