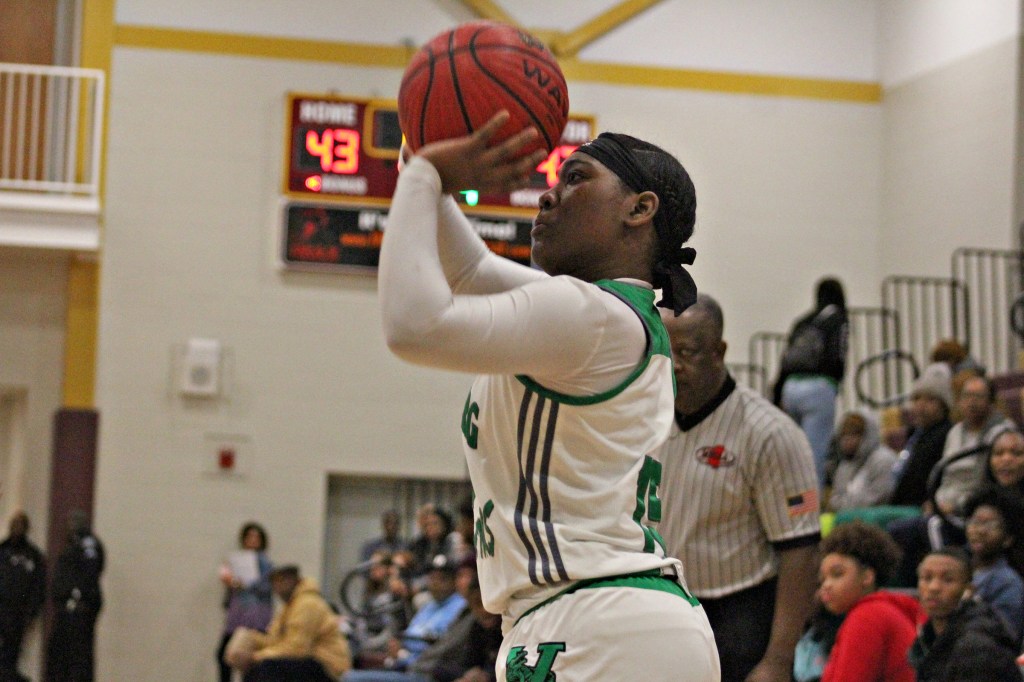 Vicksburg’s Sha’Kora Knight shoots a jumper in the fourth quarter of an MHSAA Region 4-5A tournament semifinal game against Ridgeland on Tuesday. Knight scored a team-high 10 points as the Missy Gators won 50-44. (Ernest Bowker/The Vicksburg Post)

When he took over as Vicksburg High’s girls’ basketball coach three years ago, Troy Stewart says he based his rebuilding plan on the normal career arc of a high school player. By year four, his “senior year,” he wanted to have the Missy Gators contending for championships.

They did it a year early.

The Missy Gators (19-10) will take on Neshoba Central (11-10) in the quarterfinals of the MHSAA Class 5A state tournament Saturday at 5:30 p.m. at Itawamba Community College. It’s the deepest Vicksburg’s girls’ team has been in the state tournament since 1997 and, Stewart said, validation that his rebuilding project is on the right path.

“I am extremely proud of the girls and the buy-in that they’ve had since I’ve been here,” Stewart said. “I’m happy to be at this point. A lot of people were trying to say we weren’t going to do what we’ve done. You don’t have to talk it now. It’s showing them it’s working and why.”

The Missy Gators had a 4-21 record the year before Stewart took over, and have been on a steady climb since. They’ve posted winning records in all three of his seasons and finally broke through this year to win the Region 4-5A championship for the first time since 1997.

Stewart attributed part of the turnaround to some roster turnover that coincided with his arrival. Four starters on this year’s team broke into the lineup during his first season, and other key players like sophomore Destini Sims emerged last season. Several freshmen have contributed during this postseason.

Stewart said that allowed him to work and grow with players that mostly knew only his system and methods. It’s been a multiple-year process, but Stewart hopes it has laid the foundation for sustained success.

“We got rid of a lot of the older kids and we started from scratch,” Stewart said. “This is actually our junior year (as coaches). Hopefully we’re building a program that will be a perennial inside the walls of the Coliseum, or Ole Miss, or wherever it may be. I want to always be one of those teams that people say, ‘You’ve got to watch out for Vicksburg.’ I don’t want to be one of those teams that has down years that last four and five years.”

If people weren’t watching out for Vicksburg before this season, they are now. The Missy Gators lost three of their last four regular-season games, but have ripped off three straight victories in the postseason and are one of the last eight teams standing in Class 5A.

Neshoba Central, meanwhile, has won four of its last five games including two in the state tournament by double digits.

Stewart said the Rockets and Missy Gators have a lot in common in terms of their makeup and style. Four Neshoba Central players, led by Hama’ya Fielder (16.3 points per game), average at least six points per game. Vicksburg has five players over that mark.

“They’re always well-coached. They’ve got a team full of go-getters that hustle. They run their sets, they’re never going to take a bad shot. They are what you want for team chemistry. The only thing I’ve noticed is that they’re not that large this year,” Stewart said. “I really feel if we go and play well, we should be victorious.”

The team that is victorious will advance to the semifinals against either Brookhaven or Hattiesburg, Tuesday at 5:30 p.m. at the Mississippi Coliseum in Jackson. The Coliseum has been the ultimate destination for Mississippi’s high school basketball teams for decades, but this year it’s just one more step on the path to a championship.

The state finals will be at Ole Miss’ Pavilion arena in Oxford next weekend. The Class 5A girls’ championship game is March 6 at 5:30 p.m.

Stewart said the goal, at least for the moment, is still earning the trip to the Coliseum. Whatever comes afterward will be dealt with then.

“The girls have bought in. We’re focused and ready to go,” Stewart said. “They’re hoping to get to the Coliseum now. The only problem is, the Coliseum is at a different place this year. If we walk inside those walls I’ll be happy. I think anything past where we are right now is icing on the cake. We’ve done great.”