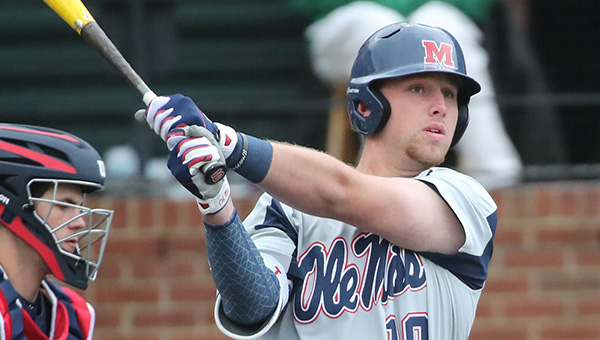 GREENVILLE, N.C. — Tyler Keenan was feeling it back in his home state.

The junior from Clayton, North Carolina, homered to give No. 13 Ole Miss the early spark it needed, and Doug Nikhazy and the Rebel pitching staff did the rest en route to a 6-2 win over High Point to open the Keith LeClair Classic.

Nikhazy picked up his second win of the season. Over the past two weeks, the Rebel ace has only allowed a pair of runs on four hits on his way to back-to-back victories. He pitched 5 2/3 innings on Friday, and struck out five batters.

The Rebels were actually outhit by High Point 8-6, but strung together timely and efficient innings matched with dominant pitching.

Anthony Servideo got Ole Miss started in the top of the first with a leadoff walk, and Keenan made the Panthers pay by crushing a ball over the fence in right-center field to give the Rebels an early 2-0 lead.

Ole Miss brought one run across in the fifth, starting with a leadoff single by Servideo. Peyton Chatagnier then walked and Keenan sent Servideo to third on a fielder’s choice. Servideo scored on Cael Baker’s sacrifice fly to make it 3-0.

High Point battled back in the bottom of the fifth. After a single and a pair of walks loaded the bases, Adam Stuart singled to left field to bring home two runs, making it 3-2.
The Rebels escaped the jam on an unassisted double play by the second baseman Chatagnier, then got those runs right back in the sixth.

Kevin Graham and Justin Bench had consecutive base hits to start the inning. Cade Sammons brought one run home on a single to right before Servideo walked to load the bases. Chatagnier then made it a three-run lead once again with a sacrifice fly to left.

Servideo only had one hit, but walked three times and scored three runs to lead the Rebels’ offense.

Ole Miss returns to action Saturday at 3:30 p.m. against No. 17 East Carolina.

Lynch’s homer broke a 1-1 tie and gave Southern Miss the lead for good. He finished 2-for-4 with a home run and two RBIs.

Tyler Spring (1-0) pitched four innings of scoreless relief for the Golden Eagles to earn the win. He retired all 12 batters he faced and struck out six of them.

Spring, Sean Tweedy and Hunter Stanley combined for seven scoreless innings out of the bullpen for Southern Miss.

USM will play a split doubleheader Saturday against Valparaiso at 1 p.m. and McNeese State at 4.