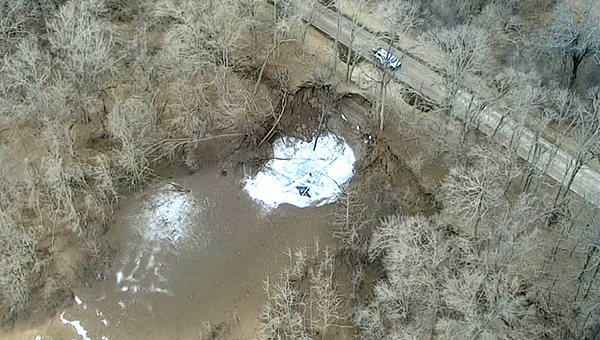 The Mississippi Emergency Management Agency shared an aerial photograph of the pipeline explosion zone near Satartia in Yazoo County.

When a pipeline carrying carbon dioxide ruptured in Yazoo County on Feb. 22, three Warren County first responders answered the call for help and were responsible for helping save the lives of 14 residents affected by the incident.

It began with a telephone call from Briggs to Garrard and a simple question.

“Jerry called and asked about an explosion in Yazoo county,” Garrard said. “I called our counterparts in Yazoo County. Michael McCain, a sheriff’s deputy, said ‘We’ve had an explosion. Don’t know exactly what it is, but we’re going to need some help.’

“I called Jack Willingham, the Yazoo County EMA director and confirmed they had an explosion and would need help.”

The three men loaded air bottles and Culkin’s utility vehicle and headed north, reaching Yazoo County’s staging area at the intersection of Highway 3 and Phoenix Road, south of the town of Satartia.

“They had five patients on the ground there who had gotten there by other means during the blast,” Garrard said. “They were traveling Highway 3 or in Satartia.”

After getting the initial five patients on an ambulance and on their way to Merit Health River Region, the trio tried to find out what had happened and worked to integrate Yazoo’s radio system with Warren County’s.

“Shane got with his center (911) and had our two frequencies patched together so we could use our channel and talk to them (Yazoo authorities), and as they talked we could hear them.”

“We were getting mixed reports of what we had at the time,” Garrard said. “They had three things going on around and in Satartia at the same time, a natural gas line, they thought it might be chlorine from the water tower that was there or CO2. They were pretty confident at the time it was CO2.

“They really didn’t have a grasp on what was going on. They knew what it was, but we really weren’t sure what to do at that point, so were told command (Yazoo County) that we were going to suit up and go look for victims.”

Once they got approval, Briggs, Garrard and Fredrick put on turnout gear and loaded air bottles on the utility vehicle.

They went to Satartia to look for people, but the town was empty. On their way back, they reached the intersection of Satartia road and Highway 3, and Garrard made the decision to go straight into the blast area.

They checked on a vehicle, but it was empty. A mile further down the road, they found another vehicle with three men — all nonresponsive.

Briggs and Garrard opened the vehicle, removed the three men and put them in the UTV.

“The pipe was a half-mile from us; it sounded like it was on top of us, still releasing CO2. It sounded like a jet plane,” Garrard said.

“It was so loud and rumbling, we could hardly hear each other,” Briggs said. “We were yelling at each other so we could hear.”

“Our goal was to get them to fresh air and to an ambulance once we found them,” Briggs said. “We radioed we have three unresponsive. It was a 4-mile, 5-mile trip. As they got into the fresh air, one of the men began moving, you could tell something was changing with them.”

On their way back, the trio met another truck of responders from Yazoo County and got one to ride with them and watch the injured men, who were taken to River Region for treatment after they reached the staging area.

Briggs, Garrard and Fredrick later went back into the hot zone, going to Holly Bluff, where several elderly people were evacuated and taken to River Region. All were treated for CO2 symptoms and later released.

“The three in the car were by far the worst of the ones we brought out,” Briggs said. He said he later talked to the mother of two of the men, who said they were later taken to University of Mississippi Medical Center for further treatment but are now doing well.

Garrard credits a firefighter survival class he took with Briggs at the Mississippi Fire Academy with giving them the ability to handle the emergency.

During a house fire, Briggs said, firefighters are able to step out of danger and replace air bottles.

“We couldn’t do that Saturday,” he said. “We had to do what we call a ‘hot swap.’ You have to hold your breath while your teammate changes your bottle. We did that; it’s not an easy task.”

They also had to lift three 200 pound men and were dressed in full gear, weighing an additional 50-75 pounds.

Briggs said he and Garrard do not consider themselves heroes.

“You think of it as 3-4 guys doing their heroic effort, but there were dispatchers helping us check car tags and checking on us every 10 minutes, and handling calls in Vicksburg; there were a lot of moving parts,” Briggs said.

“We get the glory, but there’s so much behind the scenes, the classes, the people who train us. We were just lucky,” he said.

And somewhere, Briggs said, a first responder is handling an emergency that will not get media coverage.