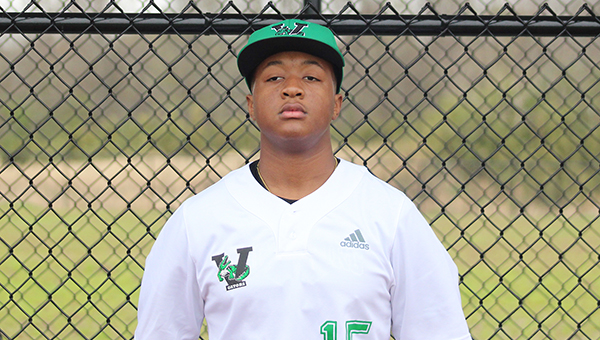 Vicksburg High baseball player Dylan Whitfield went 2-for-3 with a triple and an RBI, and had nine strikeouts in five innings pitched as the Gators beat Murrah 11-1 on Saturday.

Vicksburg High’s baseball team had a week off between games, but showed no signs of rust.

The Gators pounded out 10 hits, scored in every inning, and beat Murrah 11-1 on Saturday at Sports Force Parks.

Eight of Vicksburg’s nine starters had at least one hit. Kentrez Bershell went 2-for-2 with two runs scored, while Dylan Whitfield was 2-for-3 with a triple and an RBI. Tyler Sanders drove in two runs as well.

The Gators crept out to a 6-1 lead through four innings, then finished it via the mercy rule with five runs in the bottom of the fifth. Sanders and Rashard Flagg each hit an RBI double in the fifth inning, and a sacrifice fly by Roderick McCroy ended it.

On the mound, Whitfield shut down the Mustangs in his first start of the season. The Coahoma Community College signee allowed two hits and no walks, while striking out nine in a five-inning complete game.

Vicksburg improved its record to 2-0. It will return to action Tuesday, on the road at Greenville at 5 p.m.

American Christian 10, Warren Central 6
An early slugfest quickly turned into a pitcher’s duel, and Warren Central wound up on the wrong end of it at the Mid-Mississippi Classic on Saturday.

American Christian Academy, a Class 3A school from Tuscaloosa, Ala., scored four runs in the top of the second inning to take the lead for good and went on to hand Warren Central (1-4) its fourth loss in a row.

The teams combined to score 12 runs in the first two innings before things settled down. The game was shortened to five innings by a tournament time limit.

Clayton Thurman went 2-for-3 with a double, two RBIs and one run scored for Warren Central. Alan Kivett was 2-for-2 with a double and three runs scored.