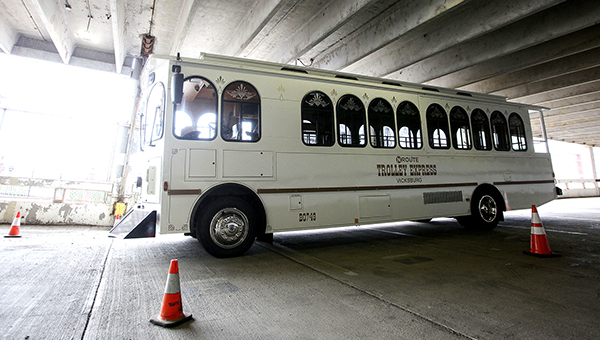 In this file photo, NRoute’s Vicksburg Trolley sits in the city’s parking garage on Mulberry Street.

Mayor George Flaggs Jr. wants the city needs to get more use out of NRoute’s trolley.

“I have spoken to the executive director of NRoute (Evelyn Bumpers) and the transportation (commission) president Don Brown and (commissioner) Mark Buys about the use of the trolley,” he said at Monday’s meeting of the Board of Mayor and Aldermen.

“It hurts me more than any of you to see that billboard, that trolley, stay parked,” he said.

Flaggs said he has offered to subsidize the cost of the trolley’s operation so more people can use it.

“I don’t see anything wrong with utilizing the trolley for weddings and utilizing it for tourists,” he said, “But I do believe a minimum of four hours a day at $100 an hour is excessive. (It’s) more than I would pay.”

He said he told Brown to give the city a budget to subsidize the trolley or reduce the number of hours of use to three hours at $50 an hour.

“I’m told it is a legal matter, but it seems if you ask me to help you, I should be able to get help from the (Mississippi) Department of Transportation, statewide or federal,” Flaggs said. “But four hours at $100 an hour is excessive, especially when the taxpayer is paying for it anyway.

NRoute bought the trolley in December 2014 using federal and city funds, with 80 percent of its $192,979 cost paid by a federal transportation grant and the city paying the 20 percent match totaling $38,595.

It made its debut in December 2015 but spends a lot of time parked at the city’s parking garage at South and Walnut streets.

In September 2015, Bumpers said the trolley could be used for special events and special programs, such as leasing the vehicle for events like weddings or special transportation programs for groups that other vehicles in NRoute’s fleet are prohibited from doing under MDOT regulations.

Brown said the commissioners are investigating how to “legally get it out there more. We’re looking at it very closely to get it out around more, and seeing if a trolley can be looked at differently (than a bus).”

He said a report on the trolley is expected when the NRoute Board meets in March.

NRoute was formed as a city department in 2006, three years after the city instituted tougher regulations on taxi cabs, forcing two Vicksburg cab services to shut down.

The buses began rolling in June 2006 and NRoute became an independent operation in October 2007, run by a five-member board.

The transit system is funded by three sources: Federal transportation grant funds administered through the Mississippi Department of Transportation, which makes up the bulk of the system’s revenue, an annual city supplement of $200,000 and fares from riders. It also receives $30,100 from Warren County annually.