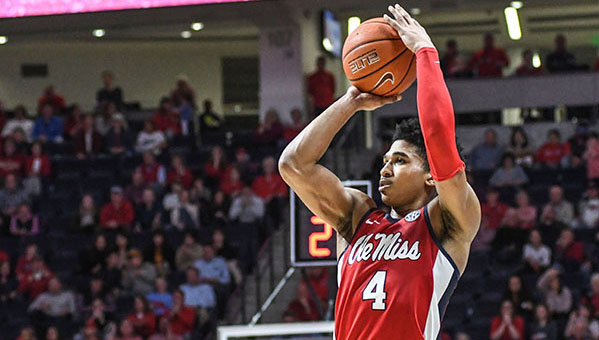 Ole Miss guard Breein Tyree (4), who leads the Southeastern Conference in scoring, was one of three finalists announced Monday for the C Spire Howell Trophy given to the top men’s college basketball player in Mississippi. (Bruce Newman/The Oxford Eagle)

JACKSON — The Southeastern Conference’s leading scorer, three players from Mississippi State, and two small-school stars were among the finalists for the C Spire Howell and Gillom Trophies announced Monday.

The awards for the top men’s and women’s college basketball players in Mississippi will be handed out March 9 at the Mississippi Sports Hall of Fame and Museum in Jackson.

Tyree was a Howell Trophy finalist in 2019, and is having an even better season in 2020.
The New Jersey native averages 20.1 points per game to rank 27th in the country, and is averaging a league-best 23.2 ppg in SEC games.

He is the only player in the SEC to rank in the conference’s top 10 in field goal percentage, free throw percentage and 3-pointers made per game. He has scored 20 points or more in 15 of the Rebels’ 29 games.

Perry, an SEC Player of the Year candidate, is already a top 10 finalist for the Karl Malone Award which is awarded to the nation’s top power forward. Perry is the only SEC player to rank among the league’s top 10 in points, rebounds and blocks. He leads the conference in rebounds, with 9.7 per game.

Woods is the first Tougaloo player to be a finalist for the Howell Trophy in its 15-year history. He is averaging 21 points per game for the Bulldogs, who are 22-6 this season.

Jackson leads Mississippi State in scoring at 14.7 points per game, but is followed closely by Carter who averages an even 14. Carter is the team’s leading rebounder and also has 54 blocked shots.

Mississippi State has dominated the two awards recently. Quinndary Weatherspoon won the Howell Trophy in 2018 and 2019, while Teaira McCowan earned the women’s program its fifth Gillom Trophy in a row last year.

Fans can vote for the winner at howellgillomvoting.hscampaigns.com. The fan vote will count for 10 percent of the final tally, while statewide sports media members will account for the other portion of the vote.