Missy Gators hit the books with some of their young fans 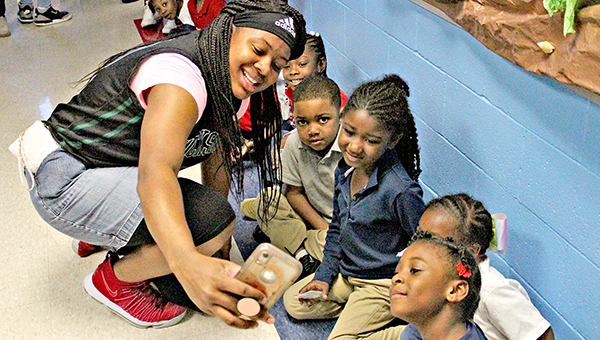 If everything goes well this week, there might be a championship parade in the Vicksburg Missy Gators’ future. For now, they settled for a warm-up with some young fans.

The Missy Gators started a big week Monday morning by heading to Sherman Avenue Elementary School to participate in the Read Across America program. They read to young students and participated in a parade up and down the school’s halls, high-fiving students and posing for photos a little more than 24 hours before they play the biggest basketball game of their lives.

Vicksburg will play Brookhaven in the MHSAA Class 5A state tournament semifinals Tuesday at 5:30 p.m. at the Mississippi Coliseum in Jackson.

“I really liked it. And it gave us the team a push for tomorrow to know that little kids are watching us and looking up to us,” Vicksburg senior center Tiarra Jones said. “Going to the Big House has given us that energy like we’re ready to go out and play. It’s a special experience, so I hope we go out and play good as a team.”

Vicksburg head coach Troy Stewart, whose wife Cosondra is the lead teacher at Sherman Avenue, said the outing served two purposes; one was to make new fans, and the other was to help his players enjoy what might be a once in a lifetime experience.

Vicksburg’s girls’ team is in the state semifinals for the first time since reaching the championship game in 1997. None of its current players were even born then.

The Missy Gators won the Region 4-5A tournament championship, and have won two games in the state tournament to reach this point. The last was on Saturday night when they beat Neshoba Central 42-36 in the quarterfinals.

“I’ve been around long enough to know that this is special from a player’s standpoint, from a coach’s standpoint, from a city’s standpoint. You don’t get this opportunity much, and when you get it you want to take advantage of it,” Stewart said. “But you also want to make sure that when you look back at it you didn’t do anything to hinder yourself. You want this to be one of those experiences that you enjoy from minute one to the last minute.”

Stewart was part of two previous trips to the state championship game as an assistant with Vicksburg’s boys’ team in 2011 and 2014. He left to take the job as the girls’ head coach at McLaurin, and then returned to Vicksburg in 2017.

He has led the Missy Gators to a 53-37 record in his three seasons, including a 20-10 record this year. His first two teams both lost in the second round of the state playoffs before breaking through this year.

This is also the deepest run any Warren County team has made in the state tournament since Vicksburg’s boys’ reached the Class 5A championship game in 2014. Stewart said the impact it could have on the basketball culture throughout the city, and not just within his program, is huge.

He also said he doesn’t want to settle for a semifinal berth. The winner of Tuesday’s game plays either Columbus or Laurel in the Class 5A championship game Friday at 5:30 p.m. at Ole Miss’ Pavilion arena in Oxford.

“Playing in this semifinals means a whole bunch to us. Everything right now, to this day, is icing on the cake. I don’t want to put the cake back in the oven. I want to cut it and get a piece,” Stewart said. “It means more for my family, for the girls’ family, it means something for Vicksburg High. It’s a steppingstone for this city if you want to look at it that way. You get recognized as a city, not as your school even. Had Warren Central been here, they’re talking about Vicksburg, Mississippi is playing good basketball now. It moves mountains for us.”