The Forgotten Flood: Darden became the voice of the South Delta 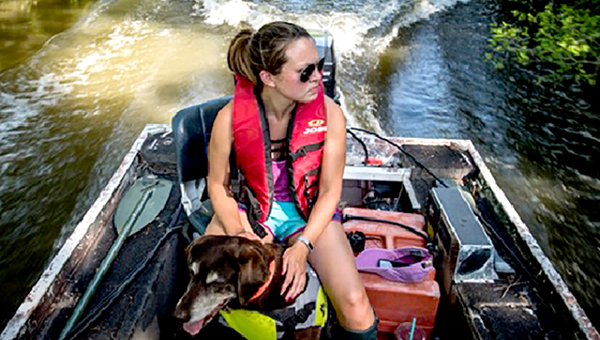 Below is the second in a series of articles that focused on the 2019 “Forgotten Flood” in the Yazoo Backwater Area that appeared in The Vicksburg Post’s annual Profile edition. The special magazine published Saturday, Feb. 29.

Things were bad. Backwater flooding was inundating the Mississippi Delta.

People were watching their land and their homes slowly go underwater, and it seemed as if no one was interested.

“We could not get the media to pay us attention, so the only thing we could do was be our own media,” Victoria Darden said. “I knew how to use Facebook and Instagram and Twitter.”

That’s when the Onward resident put her knowledge of social media to work.

While reaching out via social media, Darden realized that if more people in the community followed suit, more people would be aware of the South Delta’s plight.

However, many in the area, she said, were older and they had not become as adept with the new technology.

But as she and others began to teach these residents, things began to change.

Different companies and organizations began reaching out to help.

“It took long enough, but we could tell about April or May our information was getting out there and we were starting to reach people,” she said.

Like others in the area, the Dardens’ farmland was flooded and for six months the family had to boat to and from their home.

“It was an emotional rollercoaster,” she said.

While their home did not flood, Darden said, it wasn’t so simple as to leave.

“Somebody had to stay to make sure the water was pumped out of the levee after the rainfall and then there could have been looting,” she said. “Someone had to stay and take care of the farm and sitting there watching this happen and knowing there was a solution was very frustrating and very upsetting to realize this all came down to politics.”

The politics revolved around agencies within the federal government — namely the Environmental Protection Agency — that had vetoed a plan that would have installed large pumps in the region to help curb some of the impact of a flood. Because of those vetoes and roadblocks, the pumps were never installed.

Following the Great Flood of 1927, Congress passed the Flood Control Act of 1928.

According to a report on the Mississippi Levees Board website, the Flood Control Act was passed because 41 percent of the continental U.S. drains down the Mississippi River to the Gulf of Mexico, and it should be federally responsible.

From this Act, the Mississippi River & Tributaries Project, (MR&T) was authorized, which called for levees and floodwalls, floodways, channel improvement and stabilization, and tributary basin improvements, the website stated.

However, in 1941, at the request of the Arkansas delegation, Congress removed the Eudora Floodway from the MR&T Project, the website stated, which would then put a strain on the Mississippi River at the mouth of the Yazoo River.

“This would cause flooding in areas previously safe from floods in the Mississippi Delta, therefore, the Flood Control Act of 1941 authorized the Yazoo Backwater Project to protect the Delta area of Mississippi from these increased stages. This project included a combination of levees, drainage structures and pumps.”

The only aspect not completed were the pumps due to legislative changes in 1986 when the Water Resource Act of 1986 passed.

This piece of legislation enacted cost-sharing, which according to the website, meant instead of federal responsibility that Congress had accepted in previous acts, the Mississippi Levee Board and its taxpaying citizens would have to be partially responsible.

This was not affordable, and in 1996 then-U.S. Sen. Thad Cochran added language to the Water Resources Development Act of 1996 restoring federal responsibility.

Darden said she wished someone had stood up and fought the issue back then, but hopes things are different now.

“I think social media and the presence it carries now is a game-changer,” Darden said, referring to advocating for the pumps.

Had the pumps been in place, officials project they would have prevented $372 million in damages from 2008 to 2018, which would have already paid for the entire project — and there would have been a net gain of $152 million.

The full cost of the 2019 flood has not yet been calculated.

Darden, along with other farmers in the area, were not able to plant due to the flooding, which impacts their livelihood.

“There is no income. We are getting by but there is not a lot of assistance out there and each farmer is different as to how they were affected and what they qualified for,” Darden said. “If you did have the best-case scenario there is still nothing in comparison as to what the normal revenue would have brought in.”

Darden feels it was an injustice the pumps were not put in, therefore she along with many others in the community are not giving up the fight.

A 501(c)(3) organization has been formed by folks living in Holly Bluff, Eagle Lake Valley Park, Onward and Warren County, Darden said, and they are advocating for the pumps.

“We are working to do everything we can to make sure this does not get dropped, doesn’t get ignored and doesn’t get forgotten about,” she said.

The group is also dedicated to educating the public about the need for the pumps.

“So many people come up to me and say, ‘I had no idea this was going on.’ It kills you to hear that, but that’s the reality we face,” she said.

Darden does not see herself as a hero, just someone who is passionate about her community.

“I just look at it as I did my job as a citizen. I spoke out for the community who weren’t all so willing to put their name out there and get slandered. You have a voice, and it matters, and it is up to you to use it or not,” Darden said. “If you are not happy with the way things are in any aspect of life and you don’t make a change and stand up for what you believe in then you are just as guilty as the other person who is not doing anything because you are not either.”