The Forgotten Flood: How it happened 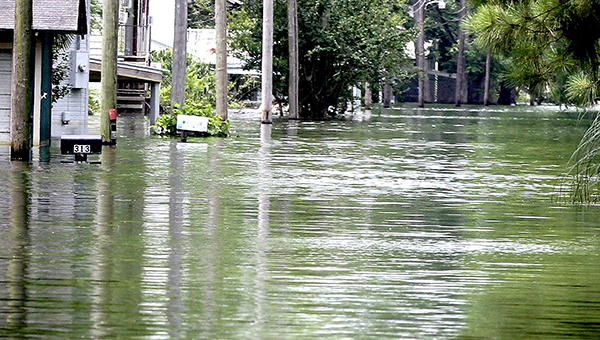 Homes are seen surrounded by backwater flood water in the Eagle Lake Community during a photograph captured in May 2019.(Courtland Wells/The Vicksburg Post)

Below is the first in a series of articles that focused on the 2019 “Forgotten Flood” in the Yazoo Backwater Area that appeared in The Vicksburg Post’s annual Profile edition. The special magazine published Saturday, Feb. 29.

“What has happened down here is the winds have changed;

Clouds roll in from the north and it starts to rain.

Rained real hard and rained for a real long time,

Six feet of water in the streets of Evangeline.”

The first four lines to singer Randy Newman’s song, “Louisiana Flood 1927” were written in 1974. They sound almost prophetic when it comes to the flood that devastated the Yazoo Backwater Area in 2019.

The flood was historic for its duration and record-setting water levels in the Yazoo Backwater Area that forced thousands of people from their homes, flooded three state highways and covered more than 500,000 acres of land — 231,000 of that being farmland that was not used in 2019.

During the flood, the Yazoo Backwater Area reached a record level of 98.2 feet. The Eagle Lake community flooded for the first time since 1973, before the existing backwater levee system was completed. The Mississippi at Vicksburg reached 51.47 feet.

“We haven’t seen anything anywhere near this long as far as the Mississippi River above flood stage since 1927,” said Drew Smith, chief of the Water Management Section for the U.S. Army Corps of Engineers Vicksburg District. “We were within about 20 or so days of Vicksburg being above flood stage for the 1927 event (185 days).”

The 2019 flooding that kept the Mississippi River at Vicksburg above flood stage for 162 days and the backwater area underwater for 219 was caused by a combination of weather and river conditions that rarely occur simultaneously. It was a situation where nature proved superior to man’s attempts to control it.

While the levee system was successful in keeping the Mississippi River out of the Delta, “The problem was we just got some unbelievable heavy rain falling the whole time frame while the river was high for that historic period of duration,” said Peter Nimrod, chief engineer for the Mississippi Levee Board.

Smith said the combination of what is recorded as the No. 7 all-time flood on the Mississippi River and four to five times the normal rainfall in the local area for the months of February and March is very rare.

Each event — rain and flooding — he said, usually have their own frequency.

“In 2011, we had a major river flood but drought. In 1991, we had a major, major local Yazoo Basin flood, but a low river. When those two things line up, you’re going to have major backwater issues, and that’s what we saw this year.”

According to a report on the flood by the Corps of Engineers, “The epic Flood of 2018-2019 spanned 12 months of above-normal precipitation events making this flood historic in duration, magnitude of precipitation, volume of water transported through the Mississippi River system, and subsequent river crests.

“July 2018 through June 2019 was the wettest 12-month July through June since record-keeping began in 1895 over the continental United States. Above normal precipitation began during August 2018 and continued into June 2019.

Those conditions and the rain that followed led to the multiple floods that eventually affected Warren County and the Delta.

Part of that record rainfall was from Hurricane Florence, which hit the Carolinas in September 2018, Smith said, putting the Mississippi River’s level above normal for that month.

Five weather events after Florence led to the 2019 Mississippi River flood, said Marty Pope, hydrologist with the National Weather Service Office in Jackson. The first was flooding caused by heavy rainfall over the Ohio and Tennessee rivers in February. That was followed in March by a melting snowpack on the Missouri River that caused flooding in that basin.

The third was heavy rains that caused flooding in the Upper Mississippi River Basin in late March and early May.

“During that time period all that water came down through (the basin) as well, and that was by more snow melt,” Pope said, “And most of that water came out of the Mississippi River side.”

Heavy rains over the Midwest and Central Plains followed, he said, adding by that time the Missouri and the Mississippi rivers were already elevated and sending high water downstream. The final event was heavy rain in the Arkansas River Basin that produced record flows.

Every time the flows from the upper Mississippi River Basin passed through the lower Mississippi Valley and the river would start to peak and crest, Smith said, another basin would get heavy rain and keep the river up and prevent it from falling.

Rainfall in the upper basin contributed to the flood’s duration, Smith said, adding, “If you take each one of those basins and think of it like a faucet, once one faucet was cut off, another was cutting on.

“So if you had a sink, it would be full. You cut one faucet off it starts to drain, you cut another one on and it goes back up or at least stays the same,” he said.

The events leading to the Yazoo Backwater Area flooding began Feb. 15, 2019 when the Corps of Engineers announced it was closing the Steele Bayou Control structure, which drains the backwater area into the Mississippi River.

With the river staying up so long and blocking the backwater’s only outlet to the Mississippi, Smith said, “We couldn’t get any water out of the backwater area.”

And any rain that fell during that period began to pond, or collect, in the backwater area.

“Locally, we not only saw above average rain in the contributing basins to the lower valley, but we also saw it locally in our local watersheds,” Smith said. “In the Yazoo (River) basin, the Big Black, we had major rain; we had pretty high flooding on the Pearl at one point.”

As the Mississippi River rose, it flooded the Kings community, Waltersville, Ford Subdivision and Chickasaw area in Vicksburg. On Feb. 23, river flooding forced the Mississippi Department of Transportation officials to close Mississippi 465, the main route to Eagle Lake, because of flooding.

As rains, aided by Tropical Storm Barry in July, continued soaking the area, the water continued ponding in the backwater area and rising, eventually forcing the Corps to open the Muddy Bayou gates, releasing water into Eagle Lake.

Smith said the Corps was able to open the Steele Bayou gates briefly in April 2019 to provide some relief to the backwater area after the March rains but soon had to close it, adding, “We never would have thought another rise was coming in May along with above-average rainfall here.

“We really had that special condition twice — in March and in May — which really makes us more rare,” he said.

Smith said the Corps’ study of the 2019 flood has provided its engineers and hydrologists with data to improve modeling and forecasting.

“We’ve got tools now that we didn’t have in 2011, as far as the hydraulic standpoint,” he said. “We’ve got modeling tools that can help us forecast and inform the public so much better now.”

The Corps, he said, has developed its own software to make more informed decisions.

“We’ve had a lot of river floods,” he said. “I can go back and name you 10 river floods that were near this one as far as 50 (feet) and above on the Mississippi River.

“We’ve never had this before. With the river that high, you’re susceptible to backwater flooding if you get the rain, and we just never got the rain before.”

“This was an eye-opener,” Nimrod said. “Even people who were doubters woke up and understood the disaster. We’ve had a flood four years in a row on the Mississippi that were significant but paled in comparison (to 2019).

“What we learned, and what everyone learned, including the doubters, was that a backwater flood was real and it’s real devastating,” Nimrod said.

“We broke the all-time record twice in backwater in March and in May,” Smith said. “You never think you see flooding like that in an area you grew up going to. Very surprised. You hope you’re wrong on your modeling and forecasting, but for the public’s sake, we were glad we were right to get out in front of this when we did and inform people.