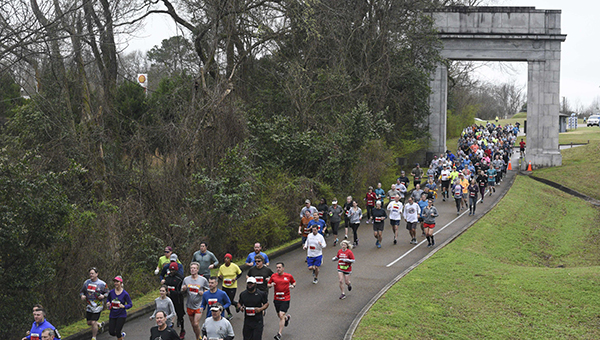 Runners pass through the Memorial Arch in the 40th Run Thru History 10k in the Vicksburg National Military Park in March 2019. (Courtland Wells/The Vicksburg Post)

Sunny skies are predicted for the weekend, and no one could be happier than organizers of the 41st annual Vicksburg Run Thru History.

“It’s not just a race anymore,” Doiron said. “It’s not just a run through a pretty street, it’s a run in an area that had a huge impact for our country, and our greater Vicksburg community has really embraced it through the years, and it has now become an event.”

Also aiding in the success of the Vicksburg Run Thru History has been the VNMP.

In the last few years, Doiron said, the Vicksburg Run Thru History committee has really tried to strengthen the relationship with the VNMP to emphasize the historical aspect of the park in addition to it just being a 10K run.

Events for the weekend, Doiron said, will include living history events at the park and canon firings throughout the day.

Also, the park will offer two complimentary post-race bus tours of the park for race entrants and their families conducted by licensed tour guides. The tours are limited to 84 people, therefore those interested will need to sign up Friday night prior to the race.

Neither the race nor the bus tours will be affected by the recent mudslides that have occurred within the park, Doiron said.

“There are some erosion issues on the land, but this does not affect the roads at all,” he said of the racecourse.

As of Tuesday, more than 600 people had registered for the event, with more to come in.

“We do take signs-ups through the start of the race on Saturday,” Doiron said.

Entrance fees for the race are $35 for the 10K run and 5K walk and free for the Cannonball Run 1-miler.

Proceeds from the race go toward offsetting travel and conference costs for teens participating in the YMCA Christian Values Conference held in Black Mountain, N.C.

“It’s a gathering of teenagers all across the eastern U.S.,” Doiron said, and in addition to fun activities, the camp allows a time of self-discovery for those attending the conference.

Mary Bradley Warnock, who has participated in the camp, said she would encourage other youth to participate.

“It can be a life-changing experience, and it is a chance for you to meet people from all over the country who you can find have similarities as you, but that are also completely different from you,” Bradley said.

While funds from the event assist in expenses, the youth are required to give back.

“Every youth does have to do volunteer hours in return, whether we have a scholarship or not,” Bradley said.

Youth eligible for the camp must be rising ninth graders through graduating seniors.

“We actually have 90 teenagers going to this event this year,” Doiron said, with every school in the county participating.

The Run Thru History 10K race was first held in 1980 and has grown each year, making it one of Mississippi’s largest road races. The 1-mile event was added in 1985 and the 5K walk was added in 1989.

“We invite everyone to be a part,” Doiron said. “It’s a great race and an even better event. The Chill will be playing post-race and with beautiful sunshine and a beautiful course, we want to see everyone out there.”

For a complete listing of race information or to sign up online, visit runthruhistory.org.

Board approves bed and breakfast with some restrictions

The owner of The Stained Glass Manor, 2430 Drummond St., will be allowed to operate it as a bed and... read more