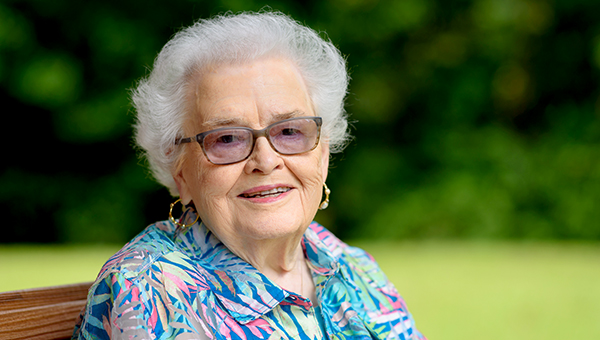 Born in Waxahachie, Texas, on May 22, 1925, Mrs. Koury was the daughter of the late Percy Gordon Cox and Ola Dorsey Cox, and her stepmother, Grace Cox.

She moved to Vicksburg in 1943, where she worked as the secretary of First Baptist Church before marrying her husband, Ellis, a World War II veteran. In 1946, the couple opened the beloved downtown children’s clothing store, Koury’s Children’s Shop, which they operated together on Washington Street until retiring in 1997.

Though for many, retirement is a season of rest. That was not the case for Mrs. Koury, who spent much of her newfound free time spearheading community events that often featured the arts. In 2002, she led the effort to organize a free concert and fireworks display downtown to celebrate the Fourth of July, creating a recurring city-wide event that continues to draw thousands downtown each summer.

Mrs. Koury also originated the International Chamber Music Festival and the Four Seasons of the Arts program, as well as many other productions that often featured the Mississippi Symphony Orchestra. In 2000, she coordinated the City of Vicksburg 175th birthday celebration, and she was a leader in organizing the annual Memorial Day weekend concert hosted in conjunction with Friends of the Vicksburg National Military Park.

Because of her determination and hard work to lay the foundation of fine arts in Vicksburg, around 3,000 children each year are exposed to live symphonic performances.

Her devotion to making Vicksburg a better place led to numerous awards, including the Special Service Award from the Mississippi Main Street Association, the Mississippi Ageless Hero Award by Blue Cross Blue Shield of Mississippi, a first-place State Community Service Award from the Daughters of the American Revolution, and a spot as the Grand Marshal of the Vicksburg Christmas and Mardi Gras parades. She also wrote and published a collection of poetry and prose, titled God Gave the Song.

Mrs. Koury was a faithful member of First Baptist Church of Vicksburg for more than 70 years, where she served on multiple committees and was always willing to lend a hand to organize and lead fellowship and church activities.

Mrs. Koury also cherished her involvement with Dorothy Brasfield and the Mississippi Symphony Orchestra, the Vicksburg Orchestral Society, Pi Alpha Kappa Sorority, Lois Vinson at the Vicksburg-Warren Chamber of Commerce and all those with whom she volunteered at the City of Vicksburg.

In addition to her parents and stepmother, she was preceded in death by her husband of 63 years, Ellis Koury; her son, Michael Koury; two sons-in-law, Danny Keyes and Keith Knudsen; and three brothers, Paul G. Cox, James L. Cox and Glenn Dorsey Cox.

Services will be at 11 a.m. Saturday, March 7, at First Baptist Church of Vicksburg with the Reverend Dr. Matt Buckles, pastor, officiating. Burial will follow at Cedar Hill Cemetery. Visitation will be from 5 until 7 p.m. Friday at Fisher-Riles Funeral Home, 5000 Indiana Ave., and Saturday at the church from 10 a.m. until the hour of the service.

The family would like to thank those who loved and tirelessly cared for Mrs. Koury: Rena Washington, Mary O’Neal and Shauna Rollins, who made her last days her blessed days; and Evelyn Parker, Mary Pierce and Matilda Stewart, for their devotion and love.

A special thank you, also, to the medical professionals, Dr. Paul Pierce III and Baleigh Ford, PA-C, the staff of Hometown Medical LLC,  as well as the staff of Merit Health River Region, Promise Hospital and Encompass Health, whose healing touch comforted both Mrs. Koury and her family.