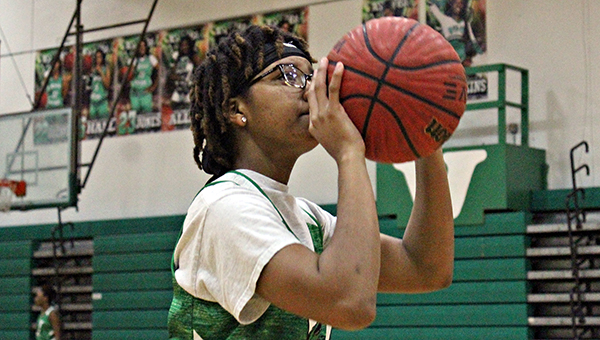 Vicksburg High’s Destini Sims shoots a free throw at practice on Monday. The Missy Gators will play Brookhaven in the MHSAA Class 5A semifinals Tuesday at 5:30 p.m. at the Mississippi Coliseum in Jackson. (Ernest Bowker/The Vicksburg Post)

For decades, the “Big House” — more formally known as the Mississippi Coliseum — has been the ultimate destination for Mississippi’s high school basketball teams.

It’s also been a notorious house of horrors for more than a few.

Shooting percentages plummet as high school players struggle to adjust to a different background. Pressure creeps in on the big stage, and players that were outstanding for 30 games slump in their last ones.

They’re issues Vicksburg High coach Troy Stewart has been around long enough to know about, and prepare for. When his Missy Gators (20-10) play Brookhaven (27-3) in the Class 5A girls’ semifinals Tuesday at 5:30 p.m. in the Coliseum, it will be their fourth game this season in a big arena. It will be the third time they’ve played in the semifinals of a big tournament.

So, even though this is the program’s first appearance in the state semifinals since 1997, it’s an experience they’ve been preparing months for.

“We went to Co-Lin last summer and played in their college gym three or four times. We went to Jackson State during the JPS (Tournament). We’ve had the opportunity to go to a few colleges and junior colleges and play,” Stewart said. “The reason we wanted to do that, as a coaching staff, was so the girls would get used to shooting on a different backdrop. In a high school gym you’ve got a wall back there. In a college gym you’ve got space. It changes the perception of the shot. So we wanted them to get accustomed to it, and Itawamba was a good opportunity for it.”

The Missy Gators shot 32 and 26 percent from the field in their first two games in a big gym this season, when they played Callaway and Murrah at Jackson State’s Lee E. Williams Assembly Center in the semifinals and championship game of the JPS Tournament.

They were considerably better on Saturday, when they shot 41 percent in a 42-36 win over Neshoba Central in the Class 5A quarterfinals. The Missy Gators’ percentage took a hit with a 1-for-8 performance from 3-point range. They shot 47 percent on two-point shots.

Senior center Tiarra Jones said having played in bigger gyms should help on Tuesday — and, hopefully, later in the week. The winner between VHS and Brookhaven will face either Columbus or Laurel in the state championship game Friday at Ole Miss’ Pavilion arena in Oxford.

“It gave us a good feeling being on a college court. Some of my teammates said that the court felt like it was huge to them. To me, it was smaller. It was easier to get up and down the court. Playing at Itawamba and at Jackson State gives us a feeling of how the court might be at the Coliseum,” said Jones, who went 5-for-9 from the field and finished with a team-high 11 points and seven rebounds against Neshoba Central.

The second big challenge for the Missy Gators is handling both the big stage of playing for a trip to the state championship game, and having to go through an excellent Brookhaven squad to get there.

The Lady Panthers have a 78-12 record over the past three seasons, but are also making their deepest postseason run in some time. They lost in the quarterfinals in 2018 and 2019.

Brookhaven has won 11 consecutive games heading into Tuesday’s semifinal, including a 63-61 victory at Vicksburg on Feb. 7. That was one of only two victories during its winning streak that was decided by less than 10 points.

It was also a game Stewart credits with spurring his own team’s playoff run. At the time, it was the third loss in four games for Vicksburg and followed a 21-point blowout at the hands of Clinton. Playing Brookhaven to the wire, however, restored the Missy Gators’ confidence and launched them into a four-game postseason winning streak that included the Region 4-5A tournament championship.

“The last game against them, I thought it catapulted us to where we are now. Now, the focus is on those one or two plays that we thought we could have done better, we’d like to do them better. We want to give ourselves an opportunity to win at the end,” Stewart said.

That has been a theme throughout the season. Other than the loss to Clinton on Feb. 4, Vicksburg’s largest margin of defeat has been only seven points. It has also had a habit of settling old scores.

Ridgeland beat the Missy Gators in the region tournament championship game in 2019. Vicksburg won when they played in the first round this season.

Cleveland Central handed Vicksburg one of its losses this season. The Missy Gators won the rematch in the second round of the playoffs.

Neshoba Central knocked them out of the playoffs two years ago. This time, the Missy Gators returned the favor.

Stewart said those are not coincidences, and now it’s Brookhaven’s turn.

“Everyone that has beaten us prior to now, the girls take it as a sense of, ‘We owe you something now.’ I want them to feel like that against Brookhaven,” Stewart said. “That’s what I’m trying to instill in them (Monday) at practice. They beat you once — by two. You owe them something. You’ve got to take it back from them. This would be the perfect time, as well, since it’s for all the marbles. We’re going to go out there and fight as hard as we can and try to take this game.”