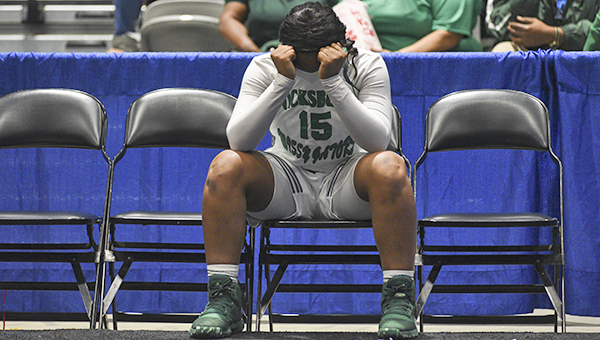 Vicksburg High's Sha’kora Knight (15) covers her face with her jersey during the fourth quarter against Brookhaven in the MHSAA Class 5A semifinals Tuesday at the Mississippi Coliseum in Jackson. Brookhaven beat Vicksburg 56-46. (Courtland Wells/The Vicksburg Post)

JACKSON — The Vicksburg Missy Gators never stopped hustling. Even down big in the second half, they never stopped trying and even mounted a comeback.

Eventually, though, they ran out of two precious commodities — magic and time — and saw their special season come to an end.

Sharquita Cook had a double-double with 15 points and 11 rebounds, and Brookhaven beat Vicksburg 56-46 in the Class 5A girls’ basketball semifinals Tuesday at the Mississippi Coliseum.

“That’s been a tenet of the team all year — they don’t really give up. And I’m glad they didn’t, because it would have gotten really ugly if they had given up. But that’s not one of the ways my team is built,” Vicksburg coach Troy Stewart said. “With the returning players we have, I think we’ve got a good core and the catalyst to start next year. We’re going right back to work to see what we can do for next year.”

For Vicksburg, Tiarra Jones finished with 14 points and 15 rebounds. Yakia Burns had eight points and eight rebounds, and Destini Sims had seven points and four steals.
Brookhaven (28-3) advanced to the Class 5A championship game Friday in Oxford. It will face Columbus (23-4), which routed Laurel 57-29 in the other semifinal on Tuesday.

Vicksburg finished its season with a 20-11 record and plenty to proud of. The team that won four games four years ago had its third consecutive winning season and reached the semifinals of the state tournament for the first time since 1997.

Stewart, who is in his third season as coach, said the disappointing ending hardly diminished what his team accomplished.

“The ride itself has been amazing. It has literally been something that’s been euphoric,” Stewart said. “I understand, and some of those ladies in there understand, how hard it is to get here. They know how hard they had to work to get here. It’s special. Today, 28 teams in 5A wanted to be here and only four were. Two of them had to win and two of them had to lose. We just ended up on the back end of it.”

The Missy Gators missed their first 10 shots in the game and fell behind 15-5 midway through the first quarter. They clawed out of that hole and took the lead in the opening minute of the second quarter, but couldn’t repeat the process the next time Brookhaven gained some separation.

Collins hit a 3-pointer with 3 seconds left in the first half to give Brookhaven a 31-24 lead. Then, early in the third quarter, Cook hit a 3-pointer and Jayla Henry a layup to give the Lady Panthers a double-digit lead at 36-24.

At the same time, the Missy Gators’ offensive momentum ground to a halt. They only scored five points in the third quarter and continued to struggle into the fourth, which allowed Brookhaven to push its lead to as many as 20 points, 49-29, with about four minutes to go.

Vicksburg only made 8 of 32 shots in the second half, most of them during a late run that cut the deficit to as little as eight points in the final minute. The Missy Gators — who lost to Brookhaven by two points in February — went 1-of-14 from 3-point range and shot 26.2 percent overall for the game.