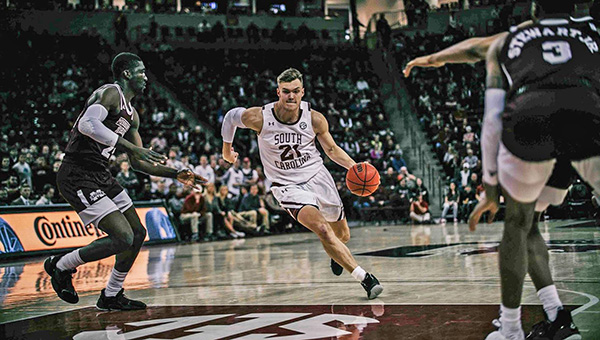 COLUMBIA, S.C. (AP) — South Carolina forward Maik Kotsar scored 20 points on his Senior Night and pushed the Gamecocks to an 83-71 win over Mississippi State on Tuesday.

The Gamecocks (18-12, 10-7 Southeastern Conference) clinched their fourth winning conference season in five years and breathed life into their flagging NCAA Tournament hopes, which nearly flatlined after Saturday’s loss at Alabama.

Although the Bulldogs still have a chance of finishing in the SEC’s top four and have a solid NET ranking, their resume doesn’t boast many very notable wins. They’ll have to win their final game and get a couple in the SEC tournament to feel strong about their at-large NCAA Tournament chances.

“They really were phenomenal tonight, and with all riding on this game tonight from our standpoint … ,” Bulldogs coach Ben Howland trailed off. “You don’t want to play them.”

South Carolina is still in contention for a top-four finish in the SEC, which would be its fourth in five years, but needs help from Florida, to which it would lose a tiebreaker. Kotsar, A.J. Lawson and Keyshawn Bryant, who threw down two highlight-reel dunks among his 12 points, helped keep the Gamecocks in range.

MSU got 17 points and 16 rebounds from Reggie Perry and 24 points from Tyson Carter, who scored 10 straight points in one second-half stretch.

Yet it wasn’t enough. Kotsar owned the paint, Jermaine Couisnard stroked a big 3-pointer and the Bulldogs dropped a game they had to have for their own NCAA Tournament chances.

South Carolina took control with a 20-0 first-half run, but Mississippi State responded with a 25-9 run to make it a two-point game at halftime. The Bulldogs wilted in the second half.

“To use all that energy, to be down so big and have to come back from that, it was really tough on us,” Howland said.