A lasting impact: Koury ‘bloomed where she was planted’ 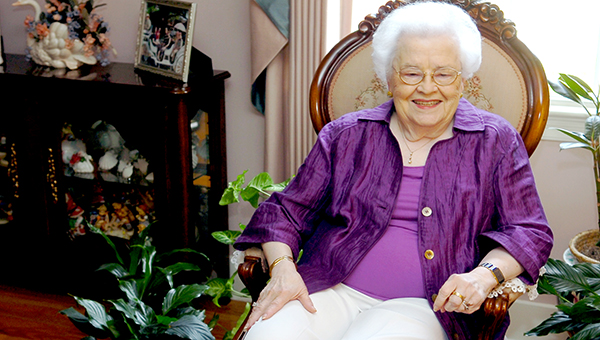 Perhaps the best description of Frances Koury’s life in Vicksburg came from her daughter, Connie Hosemann: “She bloomed where she was planted.”

For over 70 years, Koury, who died Friday at the age of 94, served Vicksburg as a businesswoman and a patron of the arts who helped develop the city’s cultural environment.

“Our father was known as the ‘Mayor of Washington Street’ and mama was the First Lady of Vicksburg,” Hosemann said.

“She’s a true Vicksburger. She loved Vicksburg and she’s going to be sorely missed,” Mayor George Flaggs Jr. said. “My heart goes out to the family.

“She was truly a matriarch to her family and she was an ambassador for the city of Vicksburg ever since I’ve known her, and (had) the best little children’s clothing store on Washington Street at one time,” Flaggs continued. “We literally grew up buying clothing from the Kourys; not only me but my children. So there’s about two generations of Flaggs that shopped with the Koury family.”

“His family had a store at 1216 Washington St., The Emporium, that opened in 1928,” she said in a 2014 interview with The Vicksburg Post. “My husband had the shoe store next door. They moved the shoes out of The Emporium and opened Koury’s Shoe Store.”

In 1946, the Kourys bought the larger building and opened Koury’s Children’s Shop, which they operated until retiring in 1997. The shoe store is now Fredrick’s, which is owned by the Kourys’ niece, Norma Massey.

“I’m going to be lost without her, knowing I can’t pick the phone up and talk to her,” Massey said. “I grew up around her at their home; right here with our stores being right next to each other. It’s a big loss to our family. She will be greatly missed.

Koury’s activities in promoting the arts enabled school children to be exposed to classical music. She coordinated events like the annual Memorial Day performance by the Mississippi Symphony Orchestra and the Four Seasons of the Arts program.

In 1990, she published a book of poetry she wrote for events and neighbors.

“The whole community owes her a great deal of thanks for the many things she has done to enhance the culture of Vicksburg,” said Dorothy Brasfield, administrative director of the Church of the Holy Trinity’s Conservatory of the Fine Arts.

“She started the Four Seasons of the Arts, which still functions and is looking forward to carrying her legacy in the years to come,” she said. “We will miss her, but we will know she is watching what we’re doing.”

When the Kourys retired after selling their building in 1997, Hosemann said, her mother’s activities in the community increased.

“It just seemed like she blossomed in retirement,” she said.

And she was always thinking of ways to improve the community.

“When she would come to you and say, ‘I have an idea,’ usually it would all work out because everybody she surrounded herself with was people who supported her and loved her. Even up to when she was 94 and couldn’t do it, they helped her do it.”

The promotion of art included her family.

Kate Knudsen, Hosemann’s sister who lives in California, recalled her mother’s efforts to get her a fine arts scholarship at the Mississippi University for Women. Because there was little art instruction in the high schools at the time she said, she made posters and did drawings on her own. When she went to MUW, Knudsen said, her mother took her portfolio of work and showed it to school officials.

“Mama wanted me to have a scholarship for my art,” she said. “She went up there and flipped through my portfolio. I was almost embarrassed; you would have thought I was an artistic genius. We walked out of there with a scholarship.”

Her mother’s actions, she said, encouraged her and gave her confidence.

“And I look around the city, and I hear people talk all the time about how much she encouraged them and how she believed in people; it inspired you to do your best,” she said. “She made so much stuff happen here.”

“I’ve said this and I mean it,” Hosemann said. “I’ve had to share my mother with a lot of people, but it was an honor to do so.”