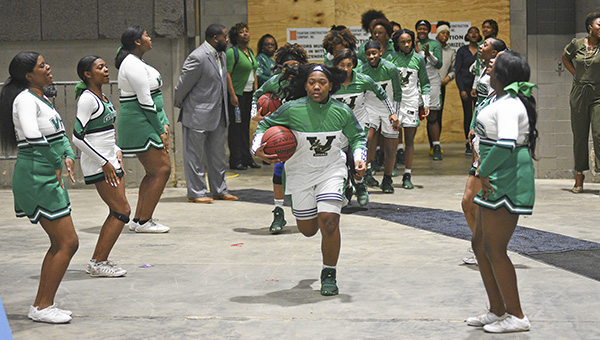 Vicksburg High's Sha’kora Knight (15) leads the team onto the court before the MHSAA Class 5A semifinal game against Brookhaven on Tuesday. Knight, a junior, is one of 11 players from this year’s roster that will return next season. (Courtland Wells/The Vicksburg Post)

JACKSON — Standing in a hallway of the Mississippi Coliseum, as his dejected players filtered out of a nearby locker room and on into the light of the arena, Vicksburg High girls basketball coach Troy Stewart was focused more on what could have been than what might still be.

The Missy Gators lost to Brookhaven, 56-46, in the semifinals of the MHSAA Class 5A state tournament on Tuesday. It was the end of the program’s best season in a generation. The last time it had gotten that deep into the playoffs was 1997.

“I’m honestly heartbroken right now. I really expected us to be playing Friday. We came up a little short tonight,” Stewart said. “Give me a couple of days and I’m sure I will be excited to get back in the lab and start working again and doing the things we need to do to get ready for next year. But right now it hurts.”

When the hurt does wear off and it’s time to go back to work, Stewart and the Missy Gators should find that the end of this run might just herald the beginning of a new era where they are a state championship contender for years to come.

Only four seniors, two of them starters, off of the 15-person roster are graduating. Four freshmen saw playing time in Tuesday’s game, and five contributed during the postseason after moving up to the varsity in late January. Those same freshmen won the Little Six Conference championship this season.

“That’s going to be big for us. I played four out of the five ninth-graders that I had, in this game. It’s great experience for them and gets them prepared for next season,” Stewart said.

It all points to a bright future for a team that won 20 games this season against a schedule that included five teams that reached the quarterfinal round of the state tournament or better.

“The ride itself has been amazing. It has literally been something that’s been euphoric,” Stewart said. “I understand, and some of those ladies in there understand, how hard it is to get here. They know how hard they had to work to get here. It’s special. Today, 28 teams in 5A wanted to be here and only four were. Two of them had to win and two of them had to lose. We just ended up on the back end of it.”

Besides the talent on the roster, the 2019-20 Missy Gators also showed a high level of grit and resiliency throughout the postseason.

In the semifinals against Brookhaven (28-3), they fell behind by 10 points in the first quarter but stormed back to take the lead early in the second. A tough shooting night allowed Brookhaven to pull away, and it led by as many as 20 points in the fourth quarter, but again the Missy Gators did not go down quietly.

Aided by poor free throw shooting from Brookhaven, the Missy Gators put together a 17-5 run to get as close as eight points in the final minute. Three missed 3-pointers and two free throws by Brookhaven’s Sharquita Cook with 13.2 seconds to go finally put an end to the comeback, but the rally brought a smile to Stewart’s face.

“That’s been a tenet of the team all year — they don’t really give up. And I’m glad they didn’t, because it would have gotten really ugly if they had given up. But that’s not one of the ways my team is built,” Stewart said, before taking a second to finally think about next season. “With the returning players we have, I think we’ve got a good core and the catalyst to start next year. We’re going right back to work to see what we can do for next year.”