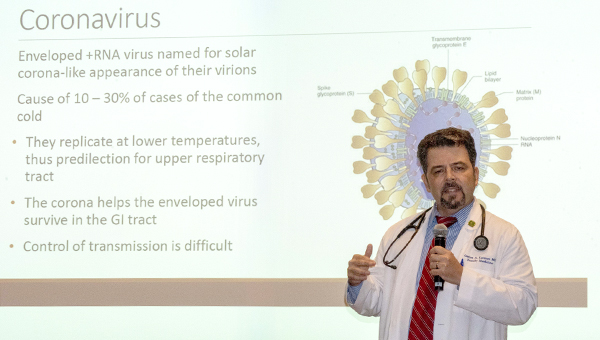 According to a Vicksburg physician, Mississippi presently has no confirmed coronavirus cases.

LaTorre was asked by ERDC officials to give a program on the disease, which has infected more than 94,000 people worldwide, according to the World Health Organization.

ERDC commander Col. Teresa Schlosser said the program was live-streamed to ERDC’s other campuses at Champaign, Ill., and Hanover, N.H.

During the program, LaTorre presented information on the disease and its symptoms, and how it and similar diseases developed and were transmitted. The virus, he said, “Replicates at lower temperatures. It likes colder weather more than it likes warm weather.

“You’re going to have it more in the temperate, colder climates than you have in the warmer climates with the exception of Southeast Asia.”

“We have had different coronaviruses, most of which cause the common cold,” he said. “But every now and then they mutate and then we have different epidemics.”

The disease, he said, is more deadly than flu, adding, “The problem we have now, is the flu symptoms are close to what coronavirus symptoms are.”

The symptoms include fever, a dry cough and myalgia or fatigue. The virus’ incubation period is normally about five days, but could be in the range of 2-14 days.

Young people and children do very well with the disease, LaTorre said. The problem is with people 65 and older and people with other medical conditions.

“A healthy 65-year-old person shouldn’t have any more problems than having the common cold that we all get when winter comes,” he said. “People who have respiratory problems — COPD, severe asthma, emphysema — these are the people who if they get infected they’re going to have a harder time.

“Those are the people we are going to go after first. When we check, if you have some medical problems, the doctors are going to be more aggressive trying to make sure they don’t get complications,” he said. “The flu kills people every year, we know that, but with this new virus we’re encountering, about 3 percent of the people who get sick are going to have a hard time, and we’re going to need some equipment and a lot of different therapies, and that’s what we’re trying to prevent.”

LaTorre said the state’s medical community is working with hospitals and the Center for Disease Control to prepare for possible infection.

“We also have facilities (at the Mississippi Department of Health) in Jackson that can do the testing,” he said. “If we have a case, we can contact them and tell them we have a case — we have a patient who was traveling and has this symptom and talk it over with them (the lab), and they may say this person needs to be tested.”

On average, he said, the results may be available within 24 hours, depending on the doctor’s location.

LaTorre said presently the best defense against the coronavirus is common sense hygiene like washing hands for 20 seconds, covering the mouth when coughing, and taking care when traveling to avoid areas where the virus has been reported, both in the United States, Europe and Asia.