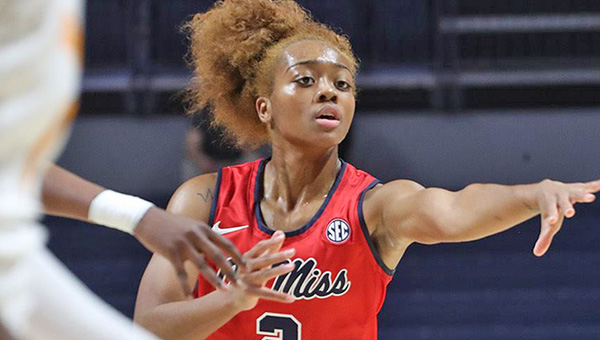 Ole Miss’ Mimi Reid passes the basketball during Tuesday’s SEC women’s tournament game against Missouri. Reid had 15 points and seven assists, but the Rebels had their season end with a 64-53 loss. (Ole Miss Athletics)

Aijha Blackwell scored 16 points and Missouri beat Ole Miss 64-53 in the first round of the Southeastern Conference women’s basketball tournament on Wednesday.

The No. 11 seed Tigers play sixth-seeded Tennessee in the second round Thursday night.
Ole Miss (7-23) failed to win an SEC game for the first time in program history, and has lost 23 consecutive conference games dating back to last season.

The last time a team went winless in the SEC for an entire season was Alabama in 2006-07.
The Rebels do have the No. 1 recruiting class in the SEC, which head coach Yolett McPhee-McCuin thinks will help turn things around.

“I think we’ll look totally different,” McPhee-McCuin said. “We have four young ladies that are home that will be eligible to play in the fall. And then we have three so far coming in that are pretty good.”

Those players were not on hand Wednesday, though, as Missouri (9-21) beat the Rebels for the third time this season.

Amber Smith hit a 3-pointer and Nadia Green made 1 of 2 free throws and then a layup to make it 34-24 at the end of the second quarter. Missouri scored 14 of the first 16 second-half points to make it 48-26 when Haley Troup hit a 3-pointer.

Reid made a layup to pull the Rebels within four with 2:22 left in the first half but they missed their next 11 field goal attempts before Jayla Alexander hit a jumper with 4:57 left in the third. Missouri made 9 of 10 shots from the field during that span.

Ole Miss did not lay down, though. It outscored Missouri 16-5 in the fourth quarter and cut a 25-point deficit down to nine on a free throw by Torri Lewis with 57 seconds to play.

“I believe the disconnect came from just we started to not believe, we started to almost give in to the things that we kind of struggled with all season. Then we had to recollect, remind ourselves that we came this far now, you don’t stop, you don’t quit,” Reid said.

Auburn 77, Vanderbilt 67
Unique Thompson and Daisa Alexander powered a 17-2 fourth-quarter run that sent Auburn past Vanderbilt (14-16) in the first round of the SEC Tournament.

Thompson was 9-of-12 shooting and finished with 21 points and nine rebounds and Alexander scored 19 and had nine assists. Erin Howard added 15 points, including a career-high five 3-pointers, for Auburn (11-17). The No. 13 seed Tigers play No. 5 seed Arkansas on Thursday.