The Forgotten Flood: Boat patrols protected both lives and property 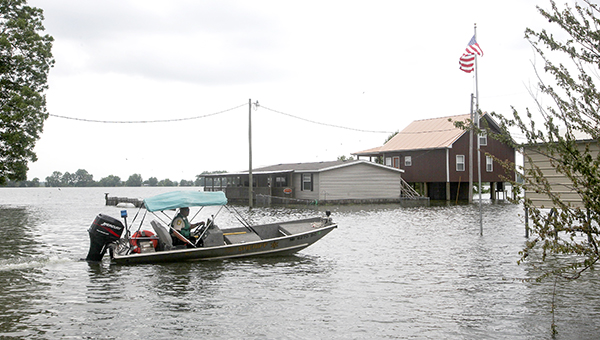 Warren County Sheriff’s Deputy Johnny Beauchamp was one of the deputies who routinely patrolled the Eagle Lake community, navigating through the community on streets. (Courtland Wells/The Vicksburg Post)

Below is the next in a series of articles that focused on the 2019 “Forgotten Flood” in the Yazoo Backwater Area that appeared in The Vicksburg Post’s annual Profile edition. The special magazine published Saturday, Feb. 29.

The streets beneath their feet, the ones they had dutifully patrolled for years, were still there. They could even look around and see some landmarks like houses and the occasional street sign.

The rest of the landscape was watery and alien, something the deputies of the Warren County Sheriff’s Office have rarely encountered.

In every direction, muddy water from the 2019 Yazoo Backwater Area Flood covered all but a handful of tiny islands holding out against the torrent. Instead of police cruisers and SUVs, the deputies used boats to navigate submerged roads. They served a variety of roles beyond law enforcement, like performing the occasional water rescue, ferrying isolated residents from their homes to dry land and back, or just being a familiar and friendly face in a time of utter disaster.

As the days turned to weeks, and the weeks to months, they remained on patrol day and night to protect the lives and property of residents in flooded areas. They were driven not only by a sense of duty, but a desire to return the trust of those who have trusted them to protect them for so long.

“A lot of people expected abandonment. They said you can’t be up here 24-7. We told them, ‘Oh yes we can,” deputy Billy Heggins said. Heggins then looked at a couple of his fellow deputies sitting across the table and added, “Each one of us could already have retired. But you don’t walk away from this job, especially when the need comes up like it did.”

Over the course of the flood’s six-month duration, dozens of deputies from the Warren County Sheriff’s Office spent time patrolling the waters, manning roadblocks or picking up the slack on other patrols for those on flood duty. Deputies Heggins, Johnny Beauchamp and Samuel Winchester were among those on the point.

Beauchamp and Winchester are two of the WCSO’s certified boat operators and headed up the waterborne patrols. Beauchamp worked the Eagle Lake area, and Winchester the flooded areas along the Mississippi River such as Ford Subdivision, Floweree and Chickasaw.

Many residents evacuated when orders were given, but some remained. Winchester said watching over them involved more than just checking in every now and then.

“Most of the people in my areas know the river gages and scales probably better than the experts. When the water gets to a certain level, they start moving,” Winchester said. “We had a few people who stayed. It was constantly reminding them of the dangers of being around floodwaters, whether it was wildlife or contaminants that might be in the water.”

Wildlife displaced by the flood was another issue. In addition to alligators and snakes that might lurk in the water, deer searching for any piece of dry land they could find were a regular nuisance. Heggins, who spent most of his time in the dry areas of the flood zone, said 14 patrol vehicles were damaged in collisions with deer.

“The deer was the most dangerous part to everybody because they had nowhere to go. I worked four deer accidents, and we had 14 (Sheriff’s Office) vehicles damaged by deer,” Heggins said. “They’d run into you. That’s them hitting the side of the patrol vehicles, not us hitting them.”

More of a nuisance were two-legged critters, Beauchamp said.

“Sightseers were the biggest thing,” he said. “They were out riding to see what was flooding. We’d have two or three a day.”

Once the area was evacuated and roadblocks set up at key intersections, only residents were allowed into the area. Sightseers were turned back, either at the roadblocks or on the water if they bypassed it in boats. Most, Heggins said, were cooperative.

“We were glad we got that response,” Heggins said. “We were appreciative. We explained what their presence meant to the people here, and we never would see them up here again.”

Thanks to the regular patrols and a strong relationship between residents and the deputies, theft and looting was not an issue in the flooded communities. One incident of a suspected theft found Mother Nature to be the culprit.

“Some people thought we had a theft, and it was an item that just floated off. We found it floating down the road,” Heggins said with a chuckle.

Winchester credited the work done before the flood for keeping things quiet during it. A regular presence in the flooded communities beforehand built a level of trust between residents and law enforcement that aided in evacuations and patrols. The deputies said residents often pointed out things that seemed out of place.

“It’s trust in law enforcement. I have to give the sheriff (Martin Pace) credit for that, because they have the utmost trust in the leadership and were very cooperative,” Winchester said. “We did public announcements. In the Floweree area we went door to door. We tried to get that information out in well enough time for them to leave.”

One of the paradoxes of effective law enforcement is that there isn’t a lot of action when the job is done well, especially in a mostly abandoned flood zone.

A big challenge for the deputies was dealing with the mental grind of daily patrol shifts that lasted hours, with seemingly no end in sight. The Sheriff’s Office had deputies on duty 24 hours a day, seven days per week, in the flooded areas.

“You’re tired, but it doesn’t change what you do,” Heggins said.

“One thing I learned is to never be in a routine. Routine can wear on you,” Winchester said. “I may patrol this area at 8 a.m. one day and 10 a.m. tomorrow. You change your routine and give your body a chance to get a break.”

Working seven days a week kept the deputies away from their families for long stretches of time. Although difficult, they said that it comes with the territory.

“Our family is used to it,” Beauchamp said.

“They know not to get mad if there’s a flood,” Winchester added with a laugh.

Simply getting to work was a chore. With so many roads covered in water, deputies had to build extra time into their schedules and patrols to get to certain areas. A drive that might take 10 or 15 minutes in normal conditions could take an hour during the flood.

Winchester said patience was also needed when working with other agencies unfamiliar with the area. The Sheriff’s Office relies on ambulance crews from the city of Vicksburg for emergency calls in the county, and routing them down back roads can be tricky in the best of times. When major landmarks are obscured by several feet of water, and extra turns need to be made to go around flooded roads, it’s even worse.

“It was so much displacement going on that we had to get creative with the routes we took to get up here,” Winchester said. “We worked pretty good with each other. But when you’re trying to explain to a bunch of guys from the city that they need to turn at the picket fence or a guy’s farm, they might not know what you’re talking about. It wasn’t bad for us. It’s just making sure we can get other services here in a timely manner.”

Lasting images of the flood

Recovery from the flood has been slow. Large piles of debris sit in front of homes along Lo Sto Road in the Eagle Lake community, and damaged houses are still waiting to be demolished.

As the residents pick up the pieces, the magnitude of the 2019 flood lingers in the minds of the deputies. Heggins, Beauchamp and Winchester have more than 55 years of combined experience with the Sheriff’s Office, and all of them seemed awed at the scope of what they saw last spring and summer.

“Growing up here and seeing the fields underwater is something I’ll never forget,” Beauchamp said. “I used to chop cotton in these fields when I was a kid. Seeing how much water there was and how long it lasted, seeing roads being overtaken you never would think see taken over. There are buildings that used to be here that aren’t here anymore.”

Winchester patrolled the Mississippi River during its historic 2011 flood when the Delta was turned into an ocean. He said the 2019 Yazoo Backwater Flood was on the same scale, even though it seemed to get less national attention.

“I think the level of devastation,” Winchester said when asked what he’d remember most about the 2019 flood. “After the 2011 flood, I did an interview with some media and said this was a flood I would never forget. Here we are, in 2019, and I’m sitting here making that statement again.”

Ominously, the deputies were wary of a sequel.

Two weeks of heavy rain in January replaced fertile fields with large ponds more suitable for farming catfish than soybeans or cotton. The gates of the Steele Bayou Control Structure, which prevents the Yazoo and Mississippi Rivers from backing up into the Delta, were closed for a time in mid-January.

The gates reopened in early February, but last year’s flood began in March. The memories of a long spring and summer are lasting, and not something the deputies are eager to go through again.

“You start to wonder what can top that, and what’s next?” Winchester said. “How much worse can it get? I hope it doesn’t.”