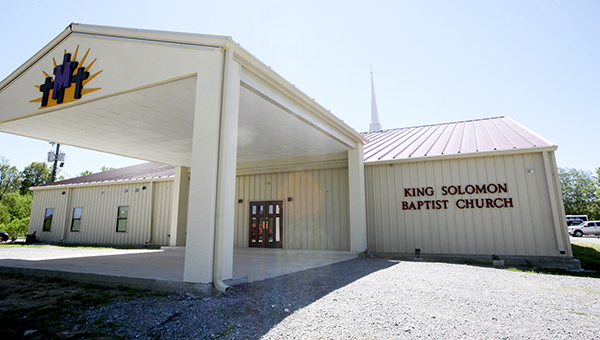 In 1860, a group of free blacks and slaves gathered in a one-story wood-frame building purchased by the Mount Pleasant Association, a white missionary society.

Tuesday, the members of King Solomon Baptist Church will celebrate their church’s 160th anniversary with a weeklong series of events marking the church’s founding.

“We typically stop once a year on the third Sunday in March to recognize the church’s anniversary,” the Rev. R.D. Bernard, King Solomon’s pastor, said.

“We remember through anniversary services what God has been able to accomplish with this particular group of believers. We stop, look back and remember the goodness of God.”

King Solomon, he said, is the oldest Missionary Baptist Church in Vicksburg and Warren County.

“It was established as the Baptist Church for what was then called ‘colored people,’” he said. “For the first 153 years, the church was located on Farmer Street. The church was located in a wood-frame building and then in a more formal red brick structure that is there now was built in 1877 and dedicated in 1880.”

The congregation worshipped in the brick church until 2015. A new church, Bernard said, was built in 2013, and for a while, services were held at both churches.

According to an early church history by the Rev. B.L. Thomas Sr., a former pastor, the mission for blacks in 1860 that led to the church “from the first was successful; so great was the increase of its numbers that a one-story building was purchased for them in which they held their services.”

Each service, according to the history, was attended by two or more whites “that the populace might be assured that plans for insurrection or uprising were not discussed.”

After the Civil War, the congregation became more organized, and in 1869 the name of the church was changed from Mount Pleasant to King Solomon.

“It’s a very fascinating history that King Solomon has because of its origins, but also because of the things that it went through,” Bernard, who has written a history of the church, said.

The Rev. B.L. Thomas Sr.’s, who was the church’s pastor at the time, car had previously been vandalized because of his civil rights activity, Bernard said.

Despite declining to host King, Bernard said, the church was active in the civil rights movement, and its pastors, he said, served in leadership roles in the Mississippi National Baptist State Convention.

“So the church has always held a prominent role in local and state Baptist life,” he said.

In recent years, he said, the church has faced the challenge of developing a 21st-century ministry.

“When I came to the church in 2003, the only electrical device in the church was one landline phone, and at that time the church had only been an every Sunday church for four years,” he said. “So we were tasked with going to a more modern 21st-century ministry.”

The church now has an audio-visual department producing videos and several outreach ministries.

The anniversary observance begins Tuesday with a pre-anniversary service with the Rev. Anthony Williams and members of the Greater Friendship MB Church, of Chattanooga, Tenn.

“We will have pre-anniversary services each night next week, preceded by a dinner theater where we will watch films of church life of some of the decades gone by,” Bernard said.

There will be a Health Fair and Blood Drive from 10 a.m. to 2 p.m. March 14 to celebrate the church’s legacy of giving back to the community, he said.

The formal anniversary service is March 15 at 2:30 p.m. with the members of Rock Star MB Church of Brandon as guests. The church’s pastor, Dr. Clifton Boggans, will deliver the message.

March 30, Bernard will have a book signing of his history at Lorelei Books.