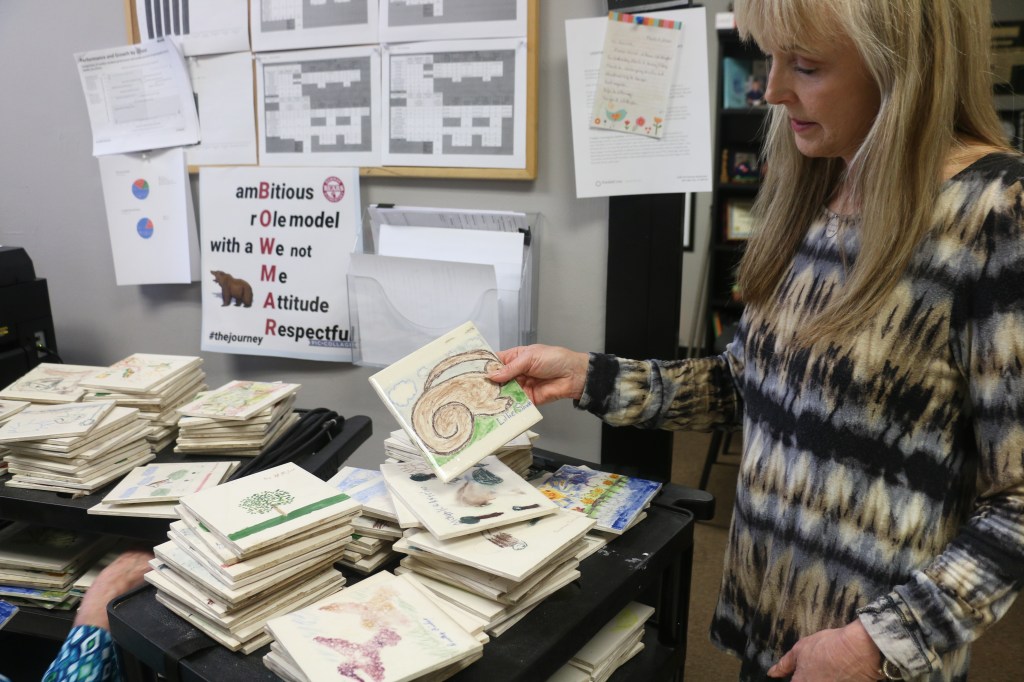 In 2012, a piece of Bowmar Avenue Elementary School’s history had been unearthed from storage.

Ceramic tiles on which students had designed images of nature were pulled from boxes and offered back to those who had attended Bowmar Avenue during the 1994 to 1995 calendar school year.

The tiles had originally been placed on brick walls in front of the school as part of the learning grant “Makarios!,” a Greek word meaning “What joy there is in this place.”

Now, eight years later, more tiles have been discovered and like in 2012, these pieces of artwork are being offered back to students.

“We are about to have a renovation and we need all the space we can get,” Bowmar Avenue Principal Jason Bennett said, and in cleaning out closets at the school, the tiles, along with artwork by students from previous years, were discovered.

It was thought, Bennett said, “that all of the tiles had been gotten rid of or destroyed, so people didn’t even know they were there.”

In a November 2012 article in The Vicksburg Post, Cheryl Montgomery said the ceramic tiles, which are painted and glazed had been part of the outdoor beautification aspect of the grant. Montgomery, along with Susie Payne, who were members of the Parent Teacher Organization, had taken action after hearing at the time that Bowmar could lose its magnet school status.

Therefore the women applied for a $10,000 grant from International Paper. Entergy also donated $1,000 to the grant and with more donors and volunteer support, more than $80,000 went into the project.

The year-long project, which in addition to the tiles, included planting trees, was a success due to the efforts of students, teachers and volunteers.

Marla Bonelli, who is the school’s art teacher, said she expects parents would want the tiles their children painted.

“They are so cute,” Bonelli said.

Because the school has posted information about the tiles on their Facebook page, Bennett said, some people had already come to the school to pick theirs up.

“Some students have come up here to sit down and go through the tiles,” he said. Former students have also been able to find tiles created by former classmates.

After 25 years, finding the tiles could be likened to discovering a time capsule or like Bonelli said, “It was like opening a gift that was tucked away.”

Those interested in looking through the tiles and artwork can visit Bowmar Elementary without an appointment. There is no charge to pick up any of the artwork created by your children.