Firm to meet with Delta residents about the 2019 flood 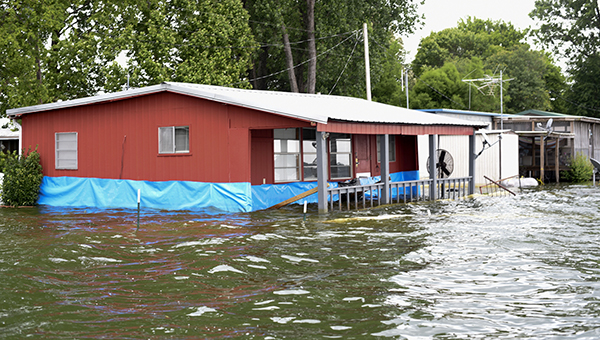 Homes are seen surrounded in Eagle Lake are surrounded by water in this file photograph from May 2019. (Courtland Wells/The Vicksburg Post)

Lawyers from two firms plan to meet with Yazoo Backwater Area residents to discuss the possibility of filing a lawsuit against the U.S. Army Corps of Engineers to recover damages from the 2019 flood.

Representatives from the Deakle-Johnson Law Firm of Hattiesburg and Pendley, Baudin & Coffin of Plaquemine, La., will meet with residents Saturday at 2 p.m. at the Vicksburg Convention Center, 1600 Dr. Briggs Hopson Blvd.

Russell Johnson, one of the attorneys involved in the suit, said the lawyers will discuss several issues during the meeting, “Obviously the damage and limitation of use of property.”

Also, people who lost property or had damage to their home or camp are invited.

“We want to see how many folks show up,” Johnson said. “We’ve gotten a good bit of feedback so far, just putting a few feelers out there; we are still in the early process.”

Johnson and Pendley said they have received calls from residents in the backwater asking about the meeting.

“We hope to get a better impression Saturday,” Johnson said.

The flooding inundated the Eagle Lake community, forcing many residents there to leave their homes and evacuate to other areas. The water also overtopped Mississippi 465, Mississippi 16 and Mississippi 1.

Many of the backwater residents and local officials blamed the Environmental Protection Agency’s decision to veto the construction of the Steele Bayou pump station, which was to be built on the Steele Bayou Control Structure to help protect the South Delta from flooding.

Russell said the lawyers are considering including the EPA in the lawsuit.

In 2007, the year before the EPA vetoed the project, its cost was estimated at $220 million. An updated estimate has not been determined.

The pumps are expected to move 14,000 cubic feet of water per second from the land or Delta side of the structure to the riverside if and when gates are closed due to high river stages.