The Forgotten Flood: Couple recounts how community rallied to fight the flood 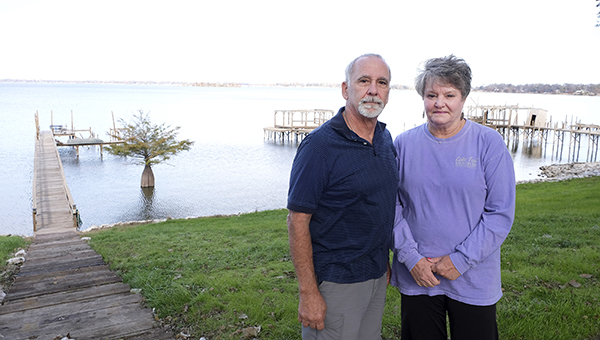 Sitting in their home overlooking Eagle Lake, Paul and Linda Banchetti recalled their experience from the 2019 flood in a few words.

Like many other residents in the small community that borders the lake’s eastern shore, the Banchettis have made Eagle Lake their home, and they built it with the potential threat of a flood in mind.

“Our garage is 4 feet lower at 97.6, so I rounded up some scaffolding, put scaffolding in (the garage) and moved our cars to town and high ground and built scaffolding with shelves and picked up everything that was low, which saved us.”

When the backwater flooding overwhelmed the efforts of the residents and others to keep it back and covered Eagle Lake, the water reached the third step of the Banchetti’s house — 1 foot below the floor joists.

“Nothing got wet on the house,” Paul said. “When we built the house, the lowest  4 feet of the garage is not framed; it’s concrete block, so we didn’t have that much of a loss to the house itself. The cabinet doors were warped and the back stairs need to be fixed, and the dock needs to be fixed.”

The couple was out of town when they learned conditions in the backwater were getting worse.

“We went to see our grandchildren in Houston on a Sunday,” Paul said. “Monday morning a neighbor called and said the power was going out and it may be a month before it was restored. I left Linda in Houston and drove back, and with the help of a friend transferred food to a freezer I had borrowed in town.”

During the flood, Paul stayed in their house, while Linda stayed in Vicksburg at a friend’s cabin.

“I managed a website for Eagle Lake Matters, and every time something official was out, I would put it out,” Linda, a director for the residents organization, said. “I would post it then on our Facebook page and our website. They (officials) would send out updates and I’d post them.”

“It was important to put out the official stuff because there was a lot of hearsay,” Paul said, “People put stuff out there all the time and a lot of that stuff was going on.”

He said Linda talked with Warren County Sheriff Martin Pace, officials with the Mississippi Department of Transportation and the U.S. Army Corps of Engineers to get information.

While Linda was providing information, Paul helped neighbors fight to keep the backwater flooding out of Eagle Lake.

“The community flood fight was on this road in front,” he said, pointing at Eagle Lake Shore Road, which runs in front of the house. “And (Mississippi) 465, that was the frontline defense.

“We bagged and water would come through, and we’d stop it up and it’d rise, and we’d add more bags, and that Saturday, May 23, a storm came in and knocked it down,” he said.

“We did what we could; these 5-6 houses along here, we armored our yards with Visqueen and sandbags and tried to make a protective measure to keep it from eroding.”

Some people whose homes were lower than his, he said, “Got water in the house after a valiant effort to keep it out. I guess I have a much greater appreciation for the power of water. When it started working its way, it was awesome.

“The Corps put 6 feet of water in the lake to start with because they were afraid it would overtop the Muddy Bayou Control Structure,” he said. “With the rains, it (the backwater) kept rising. It had nowhere to go, and it came over the road, quick.”

When the flooding overwhelmed the sandbags and inundated the community and surrounded his home, Paul’s son brought him a boat so he would have access to the dry spots in the area. At times, Linda would come to Eagle Lake and he would pick her up in the boat and take her through the community.

The Banchettis also helped organize community meetings in May at the Warren County Courthouse.

“Everybody else (in the Delta) had been having meetings and I thought we should have one in Warren County and things began to fall in place,” Linda said. “We had a good turnout; we had 300 people.”

When the water receded in August, the Banchettis, like other Eagle Lake residents, surveyed the aftermath.

“We lost everything on the outside,” Linda said. “I lost 19 trees and I had roses; everything.”

Because their home suffered no damage from the flood, they did not qualify for Federal Emergency Management Agency assistance.

And there were lessons learned by the community.

“If we had known what to do,” Linda said. “We had never gone through anything like this, so we didn’t know. We didn’t know to ask the Corps up front. I can’t say enough about Sheriff Pace and the deputies.”

“I would hope we would have a better plan of action as a community and as a county so that we might prevent a lot of the damage,” Paul added.

“That’s what we’re starting to work on; we’re trying to revamp the association,” Linda said. “I wish I had filmed what was going on the whole time.”

And the Banchettis found a new pride in the community.

“These people came together by the hundreds; women, children, men,” Paul said. “We must have put out 70-80,000 sandbags. I made a lot of new friends.”

“The average age of people who fought the flood was about 60,” Linda said. “Most of the people who are up here are retired. We cooked meals and fed at the fire station,” Linda said. “It was like the command center.”

She said inmates from Issaquena County Regional Corrections Facility provided a lot of help in the flood fight.

“If it hadn’t been for them; … They loved to come here because they were fed so well,” she said.

Paul cited Eagle Lake resident Chris Libbey for his help with providing pumps during the flood fight. “You talk about heroes,” he said.

He also commended the volunteers, the churches, Team Rubicon, a group of veterans who came to assist in the cleanup — and AmeriCorps. The county road department, Paul said, did a good job with the cleanup. “It was an enormous amount, a mountain of debris,” he said.

What is needed now, Linda said, is to get the community together, “Now that we know what can happen,” to prepare for future problems and include residents from other areas like Floweree Road.

If there is one sad note, the couple said, their friends are leaving Eagle Lake and moving to other areas.

“We have some friends who are pulling up stakes and leaving,” Paul said. “They said, ‘That’s enough,’ because at this point, there’s no guarantee it won’t happen again.

“I can’t imagine what people are going through who lost their house because we’re not young anymore; it’s not that easy,” Linda said.

The Banchettis are staying, Paul said.

“We like living here; we built this house, and this is our home; we’re not going anywhere.”