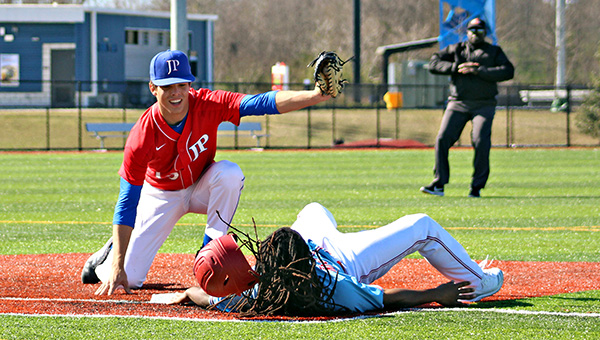 Two-out walks. Passed balls. Errors. All of the tiny mistakes that lead to big innings for opponents were present again on Thursday, and added to the Vikings’ early-season slump.

Warren Central committed four errors that led to four unearned runs, did not have a hit until the fifth inning and did not score until the seventh. When it was all said and done, the end result was an 11-1 loss to Jackson Prep on a windy afternoon at Sports Force Parks.

Warren Central (2-5) lost for the fifth time in six games. In four of those losses it has allowed at least 10 runs.

“Walks and errors equals catastrophe. That’s where we’re at,” Warren Central coach Randy Broome said. “We’re catching some hard breaks. It’s that one inning, and in baseball that leadoff walk or two-out walk for whatever reason ignites bad things for you. Then we back it up with an error or two and then it gets to snowballing and you can’t stop it. We’re still learning that, and we’re still trying to put some pieces together.”

It was actually two innings where most of the bad things happened for the Vikings on Thursday.

Two errors helped spur a three-run rally for Jackson Prep in the second inning, and then the Patriots (6-4) batted around in the third while scoring five more runs. Five consecutive batters reached base in the third inning, all of them with two outs.

Mason Nichols hit an RBI single for Prep, and No. 9 batter Cy Craig had a two-run double. The Patriots also had two infield singles.

Jackson Prep added one more run in the top of the sixth inning, and two in the seventh. Another infield hit, a dropped fly ball, and an errant throw on a steal of third contributed to those rallies.

Warren Central’s only two hits were two-out singles by Alan Kivett in the fifth inning and Braxton McCurley in the sixth. Its run came in the bottom of the seventh on a combination of two errors and two botched fielder’s choices.

Shane Lewis pitched 3 1/3 innings for the Vikings and allowed only one earned run, which Broome said was “a bright spot.”

“Shane Lewis was the bright spot of the day on the mound for us. That’s something we’re going to have to have down the road for us to have any chance of being successful, is for him and a few others to be competing on the mound and throwing strikes,” Broome said.

One other bright spot, Broome added, was that the Vikings have not hit the toughest part of their schedule yet. That starts in 12 days when they have four games against Region 4-6A rivals Clinton and Madison Central in a 10-day span.

The Vikings are also 1-0 in region play after beating Murrah on Tuesday, and they’ll face the Mustangs again on Friday night.

The upshot, Broome said, is that the Vikings are still where they need to be in the playoff race with time to work their way out of their early-season slump.

“Record-wise is not really my concern. In the record that counts, the record that gets us into the Promised Land, we’re 1-0,” Broome said. “You want to win them all, don’t get me wrong, but you’ve got to play the game first. You can’t worry about opponents, you can’t worry about records. You’ve got to play the game, and that’s getting in there, throwing strikes and hitting a little bit.”