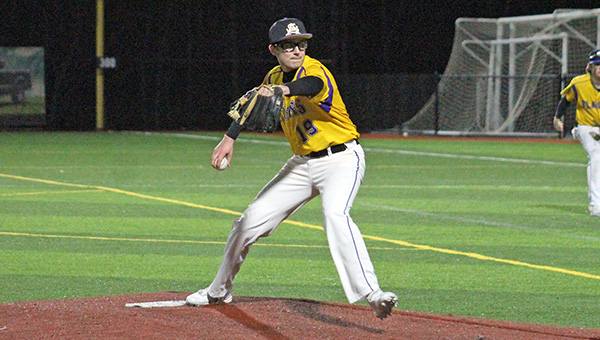 Throughout the offseason, St. Aloysius baseball coach Sid Naron said he’s had a plan to turn Tristan Wilbanks from a relief pitcher to a starter. The sophomore finally got his chance to crack the rotation on Thursday night, and things could not have gone any better.

Wilbanks struck out eight batters and did not allow a baserunner in four innings of work, and two relievers followed suit to complete a perfect game as the Flashes beat crosstown rival Porter’s Chapel Academy 9-0.

Kieran Theriot pitched two innings and struck out all six batters he faced. Lane Hubbard worked the seventh and did not allow a ball out of the infield. Hubbard induced two groundballs — one of which Theriot ran across second base to get — and got Luke Yocum to hit a foul pop up that catcher Ethan Parmegiani caught for the final out.

“This is Wilbanks’ first-ever start. We’ve been bringing him in in relief and he’s really blossomed over the last few months. We’re really excited about turning him into a starter. His secondary and third pitches tonight showed how it’s going to be with his command,” St. Al coach Sid Naron said. “And then getting Theriot and Hubbard in as well, those guys are going to be real big pieces of our pitching staff.”

Parmegiani and Carter Magee were the offensive stars for St. Al. Parmegiani went 3-for-3 with a double, triple and five RBIs, while Magee was 2-for-3 with three RBIs and one run scored.

Parmegiani tripled for the second game in a row.

The Flashes scored three runs in the first two innings, but did not blow it open until plating five in the bottom of the sixth. PCA pitcher Spencer Azlin scattered one walk and five hits through the first five innings, and then St. Al got to him for five hits and three walks in the sixth.

“We hit some balls really hard early in the game, didn’t catch some breaks, ran ourselves out of a couple of innings on the bases, but through it all we were being aggressive and I’ll sleep good,” Naron said. “The Azlin kid mixed pitches and kept us off-balance. He got us to get up under some balls in the middle of the game that kept us off-balance.”

Even with the rough sixth inning, Azlin only threw 96 pitches despite allowing 10 hits and four walks. He finished with two strikeouts in six innings.

“That inning late in the game, defensively we had some stuff going on there. But overall, I thought Spencer threw a really good game. I thought it was his best outing of the year so far,” Porter’s Chapel coach Larry Allen said. “Offensively, we’ve just got to put the ball in play and do something to give him some support.”

The Eagles (2-4) have run hot and cold offensively early this season. They scored 13 runs in their two wins. In four losses, however, they’ve scored only five runs on eight hits. They’ve struck out 75 times total in six games.

“We were just looking at too many fastballs. We’ve got to jump on first-pitch fastballs,” Allen said. “We’ll figure that out. They’re hitting fine in the cage, it’s just something that’s not translating into the game right now. But they have it there, so it’ll be fine.”

PCA will have several chances to straighten things out in the coming days. They play Bayou Academy on Friday night, and then will face Benton Academy and Clarksdale in the Battle on the River spring break tournament next week at Sports Force Parks.

The game against Benton Academy at 5 p.m. Tuesday is the District 4-2A opener.

“After a game like that, yeah, we should have done some things better, but the good thing about baseball is that sometimes you get to play the very next day,” Allen said. “I told them to think about it until 12 o’clock, and then they have to forget about it and shift gears to the next day. You don’t want to carry this over into the next day at all.”