The Forgotten Flood: Despite the odds, volunteers stood tall in flood fight 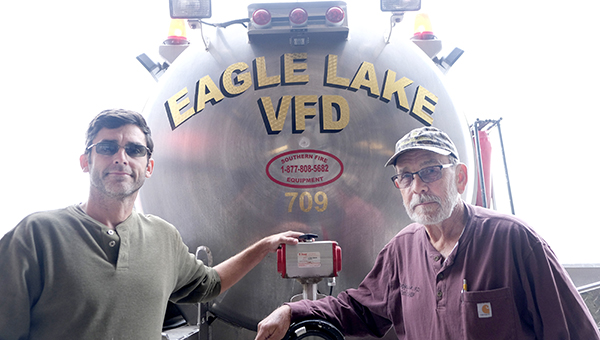 Below is the next in a series of articles that focused on the 2019 “Forgotten Flood” in the Yazoo Backwater Area that appeared in The Vicksburg Post’s annual Profile edition. The special magazine published Saturday, Feb. 29.

Earl Wallace and Chris Libbey take turns walking up to one of two large maps hanging on the wall at the Eagle Lake Volunteer Fire Department.

For more than an hour, the chief and the captain give a wide-ranging lecture on hydrology, engineering, local history, logistics and government. They don’t hold advanced degrees from prestigious universities on any of those topics, but after nearly a year of immersion, they can more than hold their own.

“I’ve got a doctorate,” Wallace said.

Libbey spelled it out some more.

Wallace and Libbey are the chief and captain, respectively, of the Eagle Lake Volunteer Fire Department. Along with a half-dozen other members of the department — Bill Parker, Chuck Ashley, Charles Greer, Richard Sykes, Kenny Parker and Bump Callaway — for six months in 2019 they spearheaded ground-level efforts to keep the Yazoo Backwater Flood from destroying the community in northern Warren County.

Trained to fight fires, they instead learned to fight water. Whether it was placing sandbags, doing water rescues, or procuring fuel to keep vehicles and high-powered pumps running, the fire department organized and performed a lot of the grunt-level work required for such a Herculean task.

“Who else were they going to look to? If something happens, they call us all the time on our phone instead of calling 911,” Libbey said.

Fighting a flood from all sides

Eagle Lake is no stranger to spring floods. Each year there are two threats — the rising Mississippi River and Steele Bayou. The historic 2011 flood that inundated a lot of the Delta came from the river but left Eagle Lake dry because of the levees that protect it.

When Steele Bayou started rising late in the winter of 2019, it was a different sort of flood. A combination of heavy rain, ground seepage and a high water table kept the area from draining. Water threatened to wash out Mississippi 465, the main access road to the Eagle Lake community. As it crept closer, the fire department sprang into crisis mode.

“We started sandbagging on March 22. In two hours we stopped the water from coming across the blacktop,” Libbey said. “That’s what started the whole deal. That’s the day we started our flood fighting. We went through 135,000 sandbags after that day.”

That was also the start of the firefighters’ crash course in flood fighting.

The last major flood to hit Eagle Lake, Wallace said, was in the 1970s. In the 40 years between, all of the institutional knowledge on how to fight it had been lost.

Simple facts, such as knowing the heights of various roads in the area, could have helped leaders place pumps and concentrate their efforts on the most vulnerable spots, but were unknown. Also lost were the techniques that had been successful in the past.

“When we had our meeting, we were asking questions. Some people were here in the 70s when they had floods, but they had no documentation. We were feeling it as we went,” Wallace said.

Libbey said one of the key things that was lacking was a clear chain of command. Wallace took the lead, but a more clearly defined system could have helped delegate tasks more efficiently.

“Earl took everything upon him on his back,” Libbey said. “We learned the importance of organization. We did not have an Incident Command System in place, and it put the burden of the world on this man.”

“And I had a hernia the whole time,” Wallace added with a laugh.

As the flooding persisted through the spring and summer, other crises arose.

A storm in May forced firefighters to perform water rescues to save trapped residents, and also undid a lot of the sandbagging work that had been completed to that point.

High-powered pumps were used to remove water through the summer but required as much as 200 gallons of diesel fuel per day. Keeping them running was not easy, though. Wallace solicited donations to cover the more than $4,000 that was spent to buy the fuel, and to transport it to Eagle Lake.

Libbey and others — including Milton Hollis, Frank Ferguson, Lonnie Rohan and Ken Klaus — woke up early and stayed up late to top off the tanks. Wallace did a “tour” of the area before going to bed each night to check on things. It was a routine they repeated until the pumps were finally shut off on Labor Day.

“I was getting up at 4:30 (a.m.), putting on hip waders and getting out to the pumps. Two of the pumps we had to fill up twice a day,” Libbey said.

Libbey, who built an exit ramp from a second-floor window of his house, did not have the hip waders for another memorable incident.

A leaking propane tank had gotten loose from one of the homes in the area and was floating through dirty, sewage-filled floodwaters. A spark could have caused a devastating explosion and fire, so Libbey stripped down to his boxer shorts and jumped in to corral it.

A video of the incident posted to social media brought some help from the state government.

“After (Wallace) put that video on Facebook, the state fire marshal sent a crew up here the next day to tie off the tanks,” Libbey said.

One of the most surprising things to Libbey and Wallace was something that did not happen. Despite dozens of relatively untrained civilians performing what amounted to heavy construction, and some Eagle Lake residents who stayed in their homes for much of the flooding, there were no life-threatening injuries.

“It was a rat race. Every day you’re trying to stay ahead of what’s going to happen next,” Libbey said. “By the grace of God, nobody got seriously hurt. We had all kinds of people working with heavy equipment, and there were no major injuries.”

“We gave it our all, that’s for damn sure”

Wallace and Libbey are not young men. Wallace is 69 years old, and Libbey is 48. The past year has taken a major toll on them, both physically and mentally.

“If we save one person’s home and everything they own, it was worth it,” Libbey said. “But the work we put in … I used to run 90 mph and now I ain’t worth anything.”

For all of their successes, there are still regrets about their failures. Forty-four homes in the area will need to be rebuilt to some degree. Some will need to be demolished entirely. Wallace said some of them might have been saved with a little more knowledge and better organization in the early days of the flooding.

“If we’d have known the elevations (of various landmarks), we could have built a berm around this sucker,” Wallace said.

With the immediate crisis over, some of the hardest work lays ahead in the recovery.

Wallace spends a lot of his day now sorting through a flood made of paper instead of water, as he applies for various state and federal aid to recoup the costs of fighting the flood. He beams with pride over saving a home, only to express frustration moments later about the levels of bureaucracy they had to go through to do it.

For all they’ve learned, there is an obvious weight that washes over them when the thought of reusing that knowledge settles in. Libbey’s eyes take on a vacant stare when he thinks of the effort of the past year, and then doing it again.

“It would be more organized and less stressful on a few individuals. It would not be easier,” Libbey said.

For now, though, part of their battle is over. The flood has receded. Even they might debate whether they won or lost. But the fact they did what they could, at the expense of their own well being and without hesitation, brings a sense of pride.

“I’m just a hard-headed old man. I’m not a flood-fighting expert,” Wallace said. “We did it to the best of our ability. We gave it our all, that’s for damn sure.”