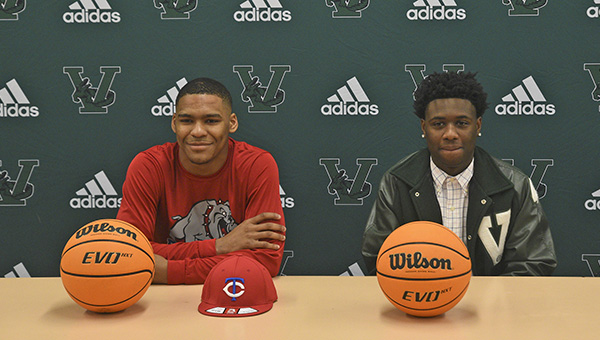 Years of practice, sweat and hard work in the gym that Cameron Butler and Peytin Jackson put in culminated in a moment to treasure in the library.

The two Vicksburg High boys’ basketball players celebrated their signing with colleges on Tuesday with a ceremony in the school’s library. Jackson signed with Tougaloo College that day, while Butler had previously sent his letter of intent to Copiah-Lincoln Community College.

It was both a reward for what they’ve already done, and merely one step on what they hope is a much longer journey.

“It’s great. I feel good, but at the same time I still haven’t done anything yet. I’m still humble and ready to work. That’s how I go through life,” Butler said. “I always knew if I worked, it would come. But after last season I was like, ‘Yeah, I can really do this.’”

Butler and Jackson, both guards, were both key players on this year’s team that finished 20-10 and reached the second round of the MHSAA Class 5A playoffs.

Like his teammate, Jackson said he knows there’s plenty of hard work still ahead.

“It’s a good opportunity for me to go play basketball. Tougaloo can let me come in and learn the game. They’re going to help me build my game,” Jackson said. “Education-wise, it’s going to be better. Education is the first priority. Me going and studying computer science, it’ll be good for me in the future.”

Jackson was a multiple-sport athlete growing up — he played football, soccer and cross country — but eventually decided to focus on basketball.

“I was a football player, really, and I played soccer. But basketball and soccer are in the same season, so I always played soccer. In seventh grade, all my friends played basketball so I chose basketball,” Jackson said, adding with a laugh, “I didn’t like being cold. And there’s a lot of running in soccer and I wasn’t feeling that. Soccer takes endurance. It’s good training.”

Jackson averaged only 3.0 and 3.7 points in a reserve role for most of his first two varsity seasons, but blossomed this year. He scored in double figures 18 times in 29 games, including a season-high 25 in a playoff loss to Center Hill last week. He also hit the game-winning shot at the buzzer in a 59-58 win over Ridgeland in the first round of the Region 4-5A tournament.

He said now he’s ready to work on a different skillset as he moves to the next level.

“Learning, getting my IQ up and learning the game. I’m going to Tougaloo to enhance my body. Learn how to eat, sleep, think the game better all the way around,” Jackson said. “I feel like when I go to Tougaloo I’m going to be their primary ballhandler, so I’ve got to come in as a freshman and understand this to put everybody in the right position.”

Like Jackson, Butler is hoping to start right away when gets to Co-Lin. The Wolves are losing seven of the 14 players from this year’s roster to graduation, which should give Butler an opportunity to play immediately.

“If I go in and I work, I’ll play. That’s a big deal. That’s the main thing I was looking for in my recruitment, was the chance to go in and play,” Butler said.

Also like Jackson, Butler was a three-year contributor for the Gators who finally came into his own this season. His scoring average was triple what it had been during his first two seasons, and he was in double figures in 16 of the Gators’ last 17 games. When that streak was broken in the playoff loss to Center Hill, he finished with nine points and five rebounds.

Butler said he could start to feel himself improving last season, which drove him forward this year. It’s a process he also seems ready to repeat as he heads to the college ranks.

“In practice I was moving better, I was making shots I don’t normally make, I was finding teammates I couldn’t see before. It was a process,” he said. “It makes you want to work even more. Last year, I was just working, working, working and I wasn’t seeing results. But when I actually got a chance to show what I could do I saw the results and was like, ‘I’ve got to get back to the gym and work.’ That goes back to my mindset. I’m always hungry and want to work.”