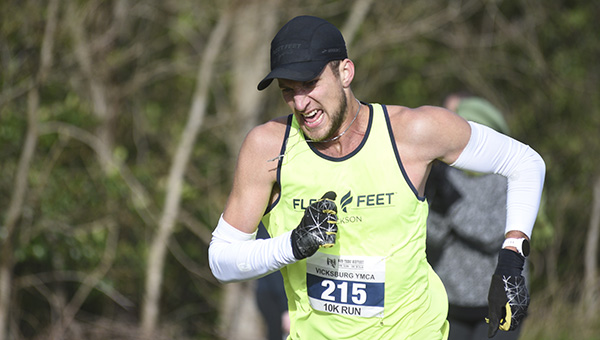 Peter Kazery finishes on the last stretch during the 41st Annual Run Thru History at the Vicksburg National Military Park on Saturday. Kazery won the 10K run championship for the third consecutive year, and fourth time in five years. (Courtland Wells/The Vicksburg Post)

When it comes to the Run Thru History there’s Kazery, there’s Keri, and then there’s everybody else.

Peter Kazery and Keri Frazier added to their rich — and still growing — legacies in Vicksburg’s premier running event on Saturday by winning the men’s and women’s championships, respectively.

Kazery clocked a time of 32 minutes, 56 seconds to win the overall title for the fourth time in five years. Frazier finished in 41:29 to win the women’s crown for the 11th time in 19 years.

“I love it, because I’m from here so I want to win this race and I want to hold the record. That’s my next goal, is to get the record,” said Frazier, a Vicksburg native who now lives in Birmingham.

Kazery tied Joseph Curro’s record with his fourth overall championship in the 41-year-old event. Curro’s four titles were spaced seven years apart, from 1994-2001, while Kazery has gotten all of his since 2017. 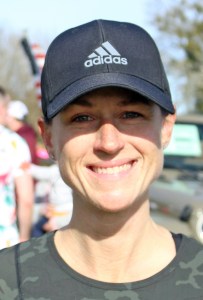 The 28-year-old Kazery also joined his brother William (2011-13) and Stephen Walsh (1985-87) as the only runners to win three consecutive Run Thru History titles.

“You never know. You’re on the border of Louisiana and Mississippi, and anybody can come. It’s a really good regional field where anybody can show up, and it’s just like any other sports where underdogs win every day. It just depends on how you feel,” Kazery said in explaining his success.

Frazier’s dominance, meanwhile, is beginning its third decade. The 37-year-old won her first RTH women’s title as a high school senior in 2001. She added four more in the ensuing decade, and then ripped off five in a row from 2013-17.

After finishing second the past two years, Frazier got back on top Saturday. She finished eighth overall and beat women’s runner-up Kristi Hall by 49 seconds.

Hall finished second in the Run Thru History for the ninth time. She has multiple championships in Vicksburg’s other road races, but has never won this one.

“I didn’t run the time I wanted, but that’s OK. I’m just glad to be out here and healthy,” Frazier said.

Kazery took an early lead on Ryan Crandall — the 2017 winner — and maintained a 10-second advantage for most of the race. The two came through a water stop at the halfway point that far apart, and the gap widened slightly from there. Crandall clocked a time of 33:26, exactly 30 seconds behind Kazery, and finished as the runner-up for the second year in a row.

“After the first mile he had made a big surge and I just couldn’t retaliate from that,” Crandall said. “I tried to make a surge toward the end of the race, but it was too late.”

Kazery said his familiarity with the course helped him once he started to separate from Crandall.

“I separated right by the (Illinois Monument) and just kind of held the gap there. Once you get there, it’s a downhill mile, a roller,” Kazery said. “Once you get (to the water stop), if you have a lead going into the back loop you can rocket. As long as you stay consistent, it’s hard to eat that up. By the time you recover from the up, you’re going down and then you’re up again. Knowing the course can really dictate how you’re going to play to your strengths.”

Both said it was difficult to regroup for this hilly race a week later. 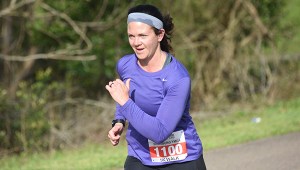 “Usually I take a whole week. But this race is so neat that, unless I’m hurt or something, I’m going to be here,” Kazery said. “Especially a day or two after the marathon, your legs come back to you and you’re really sore and really tight. I ran for the first time Thursday, really easy, and ran again Friday to see how my body is and what kind of feedback I’m getting. The last mile or two definitely was not effortless.”

In the 5K race walk, another dynasty continued as Larry Robinson won his sixth Run Thru History overall championship and second in a row. The 50-year-old from Forest finished with a time of 30:13.

Coming in fourth was the women’s champion, Jennifer Mallard, in 35:23. It was a breakthrough win for the 43-year-old Vicksburg resident after runner-up finishes in 2018 and 2019.

Beth Adams was the women’s runner-up, in sixth place overall with a time of 35:38.
Mallard is now the reigning women’s champion in all three of Vicksburg’s major road races ¬— the Run Thru History, Over the River Run, and Chill in the Hills. 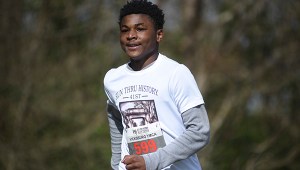 Lamar Brown finishes on the last stretch of the 1-mile fun run during the 41st Annual Run Thru History Saturday at the Vicksburg National Military Park. (Courtland Wells/The Vicksburg Post)

“This finishes up what they consider the Grand Slam here in Vicksburg. That’s awesome. I feel like I need to retire now,” Mallard said with a laugh. “I always stay close to the top, but this is the first time I’ve won. I really enjoy it, because I do most of the races here. I don’t travel a whole lot. It’s a big deal for me to win the local ones.”

In the Cannonball Run 1-mile children’s fun run, 12-year-old Lamar Brown blitzed across the finish line in 6:30 to win the overall title. Evan Mallard was second, in 6:41, and Luke Bond third in 7:04.

Cora Lindsay won the girls’ championship and was fourth overall with a time of 7:05.