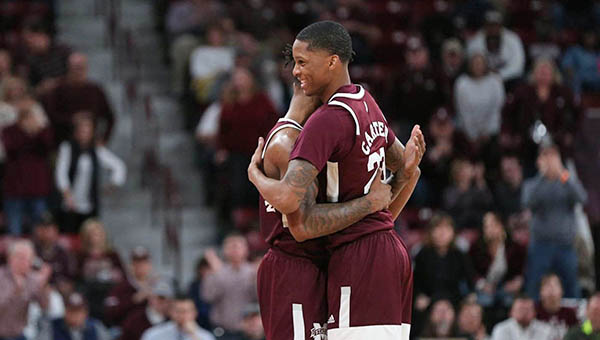 STARKVILLE (AP) — Reggie Perry had 22 points and 14 rebounds to lead Mississippi State to a 69-44 win over Ole Miss on Saturday night.

It was Perry’s Southeastern Conference-leading 17th double-double of the season and 26th of his career. Mississippi State (20-11) finished the regular season with an 11-7 SEC record, its most conference wins since winning 12 in the 2007-08 campaign.

The Bulldogs clinched their third straight 20-win season under coach Ben Howland. It marks just the third time the program has posted at least three 20-win seasons in a row. They also earned one of four double-byes for the SEC tournament and won’t have to play until the quarterfinals on Friday.

Mississippi State will play either Florida, Georgia or Ole Miss at approximately 2:30 p.m. on Friday.

“The double bye is critical because our best chance to know that we’re in (the NCAA Tournament) is to win the (SEC) tournament. That’s our goal,” Howland said. “This allows us now to have two out of the next three days off to really try to get our guys healed up. At the same time, we need to stay focused on what we need to do and what’s ahead of us. It’s huge to have that .”

Nick Weatherspoon and Robert Woodard II each had 11 points for Mississippi State, while senior Tyson Carter had nine in his final home game at Humphrey Coliseum.

The opening minutes featured five ties until Mississippi State started to grab control late in the first half. Perry scored on three straight possessions to highlight a 10-0 run and gave the Bulldogs a 28-21 lead with 4:41 left in the half.

The Bulldogs opened the second half on a 15-6 run to quickly put the game out of reach, and led by as many as 27 points.

“It was our best defensive performance that I can remember here at Mississippi State, and I can’t remember a time when our defense was so good,” Howland said. “Doubling ball screens on Tyree really benefited us, and this was the best defense we played all year.”

Mississippi State shot 46.2 percent from the field and made 19 of 24 from the freemthrow line. The Bulldogs held a 42-30 rebounding advantage that included 11 offensive boards.

Ole Miss shot just 29.4 percent from the floor and made only 2 of 17 shots beyond the arc. The Rebels were 12-of-17 from the free-throw line, had 11 turnovers and shot just 19.2 percent in the second half.

Ole Miss’ only chance at reaching the NCAA Tournament is to win five games in five days to claim the SEC championship. The path starts in the play-in round Wednesday against Georgia. The winner of that game takes on Florida on Thursday afternoon.

“We have to regroup and I’ve been disappointed with our team’s effort all year on the road. It’s something we have to get fixed before next year. It’s just our toughness and we are not tough on the road,” Davis said.