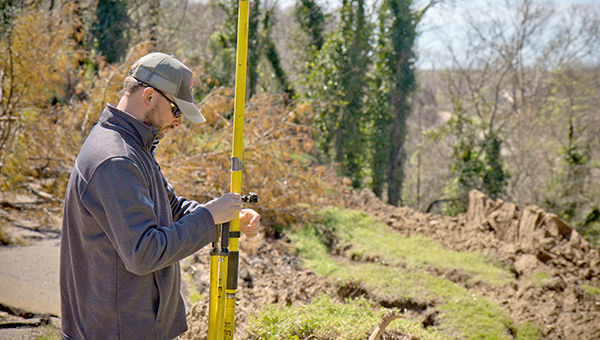 Daniel Hickman, a civil engineering technician and member of the U.S. Army Engineer Research and Development Center’s Coastal and Hydraulics Laboratory’s Unmanned Aircraft Systems Team, sets up equipment for a UAS flight over a landslide at the Vicksburg National Military Park. The team is gathering photographic and LiDAR data in order to aid in the assessment of landslides and erosion that occurred last month in the park due to unprecedented amounts of rain and heavy downpours. (U.S. Army photo by Jared Eastman)

A team of researchers from the U.S. Army Engineer Research and Development Center recently assisted the Vicksburg National Military Park in assessing landslides and erosion on the grounds.

The Unmanned Aircraft Systems Team from the Coastal and Hydraulics Laboratory was asked to use their expertise in data collection to obtain information on the damage to the park that occurred last month due to unprecedented amounts of rain and heavy downpours.

“We are happy to provide the personnel and equipment for this task,” said Col. Teresa Schlosser, commander of the ERDC. “It’s about community and helping where we can.”

The team used unmanned aircraft and surveying techniques to gather photographic data and LiDAR to construct a 3D image of the impacted area to help with short-term stabilization and long-term rehabilitation.

“It’s really nice that we have other government resources that we can reach out to and utilize right here in our own back yard,” said Bess Averett, executive director of the Friends of the Vicksburg National Military Park and Campaign.

Images and data taken by the team will be available to leadership in the U.S. Department of Interior to aid them in their evaluation of the severity and impact of the damage — most of which occurred inside the Vicksburg National Cemetery.

“It’s the worst that I have ever seen,” said William Justice, superintendent of the park.

Large amounts of water falling at one time eroded away roads and hillsides, causing road slopes and earthen structures to fail — half of the width of the road near Grant’s Circle has completely collapsed. Officials are mindful that the nature of this event is ongoing as, in Vicksburg, March generally receives the highest average monthly rainfall volume of the year.

Also on hand to assess the landslides were experts from the United States Geologic Survey. National Park Service archeologists were present to ensure the integrity of the cultural resources.