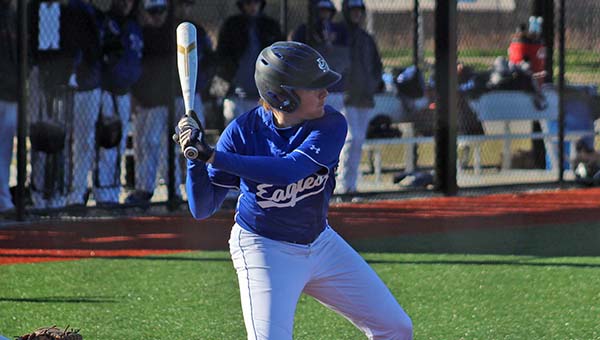 Porter’s Chapel Academy’s Luke Yocum bats during a game against Clinton Christian earlier this season. Both teams, along with St. Aloysius, Vicksburg and 13 others, will participate in the Battle on the River tournament this week at Sports Force Parks. (Ernest Bowker/The Vicksburg Post)

Rubber pellets and muddy river water might not be exactly sand and surf, but for Mississippi’s high school baseball teams desperately looking to play games it might be even better.

Seventeen teams, ranging in size from MAIS Class 2A to MHSAA Class 6A, will descend upon Vicksburg and Sports Force Parks beginning Monday for the Battle on the River spring break baseball tournament. Among those in action are Warren County teams Porter’s Chapel Academy, St. Aloysius and Vicksburg High.

A total of 23 games will be played over three days, providing rain-weary teams a chance to work out the kinks in their lineups before their region and district schedules begin next week.

“This facility (Sports Force Parks) has really, really helped out this year. We’ve gotten to play our games and everything because it’s been here,” PCA coach Larry Allen said. “The Jucos have been here and really appreciative of Sports Force because they wouldn’t have gotten to get some games in otherwise. So the spring break tournament should help some of those teams. Some of them have probably only played three or four games.”

“We were trying to get that Benton game scheduled earlier, and it just worked out where they could come down and play and we could do it then,” Allen said.

PCA will also play Clarksdale on Wednesday at 11:45 a.m.

In addition to the Vicksburg game, St. Al will play Leake Academy at 5 p.m. on Monday.
The Flashes’ schedule at the Battle on the River is a bit abbreviated because it’s only the first part of a busy week. They’ll head to the Coast on Wednesday to play in The Battle on the Beach, a huge event that features nearly 60 teams.

St. Al coach Sid Naron said it will stretch his pitching staff, but benefit the team in the long run. The Flashes (3-1) have only played four games so far, and have two District 3-4A games against Park Place on March 17 and 20.

“It’ll be crammed in there. We’ll have to have some pitching performances against some of the quality teams we’re going to see down there on the Coast especially. I’m real excited about next week and the challenges we have,” Naron said. “I’m looking forward to getting some other guys some playing time. We still have guys we want to see in different spots that we haven’t been able to get in a game yet.”

Naron added that a more relaxed week centered around baseball is good for team morale and chemistry.

“You wish by this time you had played a lot more games, but we’re excited about this spring break,” Naron said. “That’s a really good team-building week. No school, and really developing team chemistry with conference play coming up after spring break.”

Most of the other teams coming to Vicksburg this week likely feel the same way, judging by The Battle on the River’s rapid growth. It started in 2017 with eight teams at Bazinsky Field, and then doubled in size when Sports Force Parks opened last year. It is the only major spring break tournament in Central Mississippi, which makes it an ideal destination for teams from the Delta and I-20 corridor.

“I think it’s only going to get bigger, especially with this facility out here and the weather this time of the year. People know you can’t play on any other field. So there’s a lot of interest in coming to Vicksburg,” Naron said.