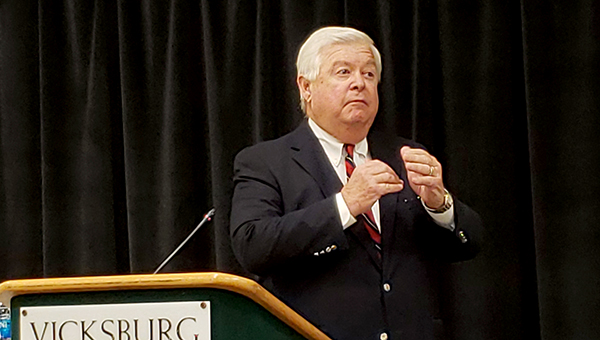 Lawyer John Deakle explains a point of law at Saturday’s meeting of residents and landowners in the South Delta to discuss the possibility of suing the Environmental Protection Agency and the U.S. Army Corps of Engineers for damages caused by the 2019 backwater flood. (John Surratt/The Vicksburg Post)

A meeting Saturday of Delta residents and property owners about filing a lawsuit against the Environmental Protection Agency and the U.S. Army Corps of Engineers to recover damages from the 2019 Yazoo backwater flood was met with mixed results.

While some indicated they were interested in the suit, others were concerned taking legal action against the two federal agencies might prevent the pumps from being installed.

“We’re a whole lot closer to having the pumps installed right now than we were five years ago,” said Hunter Fordice, a Warren County resident with farmland in Issaquena County. “There’s a whole lot going on at the federal level to get these pumps installed.

“I think it’s mighty, mighty close to hatching, and I’m scared to death that what you’re fixing to do is going to shut it down,” he told Hattiesburg lawyer John Deakle, one of the two lawyers meeting with the residents and property owners.

“You know the two people involved are the EPA and the Corps of Engineers and you go file a lawsuit against them with all the affected people asking for damages on their property, what’s the incentive for them to continue on with the project?” Fordice asked.

“They may pay out more in damages than it takes to put the pumps in.

“I think we’d rather have the pumps than damages paid for the project. I think there’s a big effort going on behind the scenes on the federal level and I think there’s progress being made.”

Fordice said the big effort is to get the EPA to drop its veto. Once that happens, he said, “It’s a matter of funding.”

Clay Adcock of Holly Bluff said the concern was over the timing of the suit and whether it will affect the potential for the pumps.

“The pumps are the end game,” he said.

He asked if the suit could be delayed.

A settlement based on past damages, Adcock said, “Won’t go into perpetuity. The pumps will fix it for me, my children, my children’s children, and a one-time payment from this (suit) won’t do that.”

“It boils down to this, if you trust the government enough to take care of you, stay with the Corps,” Deakle said.

Ricky Lee of Sharkey County asked Deakle to consider what the suit may do.

“I might not want part of the damages if I know we’ve got a shot at the pumps,” he said. “You understand that you’re taking a select group of people, and there are some people who want that money. They want that money because their house is gone. Those people can initiate that lawsuit.

“Whether the EPA and the Corps react negatively or positively, who knows? But we’re the ones who are going to pay the consequences,” Lee said.

One woman expressed her anger at the Corps, saying the flood forced her out of her home for seven months because of the damage.

“Some of us aren’t rich farmers; some of us live there because we love the peace and quiet; it’s been two years and nobody’s done nothing,” she said.

Deakle and Plaquemine, La., lawyer Patrick Pendley met with the residents and property owners Saturday to determine if there was an interest to file a suit against the EPA and the Corps.

Pendley said the suit is not a class action lawsuit, and people will be represented individually.

“We fully intend to sue the EPA,” Deakle said. “We cannot maintain the suit from a legal standpoint if we don’t include the Corps. I know there’s been some back and forth between the Corps and the EPA. That the Corps wants to put in the pumps and the EPA tried to bring it to a halt.”

“It won’t be a suit to force them to put the pumps in,” Deakle said. “As private lawyers, we can’t accomplish that, but we might bring more attention to it.”

He said the suit will be on a contingency fee arrangement, meaning if it is not successful, the people who sign as clients will not pay legal fees.

He said the case will be argued in Washington, D.C., before a judge in U. S. Court of Federal Claims.

Any type of claims awarded, Deakle said is paid out of a fund that Congress established for that purpose.

“I will be honest,” Deakle said. “It’s going to be a long, hard, slog. The government will fight it. We’re cautiously optimistic we will be successful.”