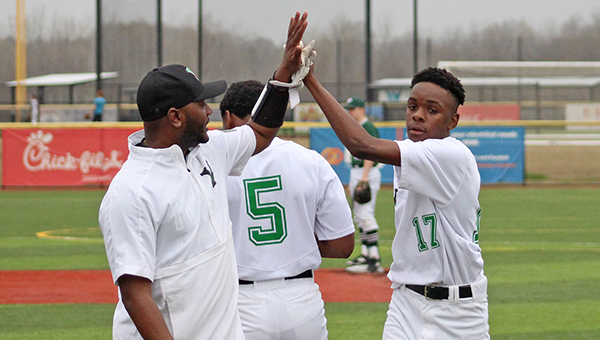 Vicksburg High’s Chris Green (17) high-fives first base coach Nick Carson after reaching base on an error in the third inning of Monday’s game against Park Place Christian. Green allowed two runs in three innings of relief on the mound and earned the win as the Gators beat Park Place 4-2. (Ernest Bowker/The Vicksburg Post)

The Vicksburg Gators did not play a full game on Monday, but they did play a pretty complete one.

The Gators mixed some smart and aggressive baserunning with quality pitching and defense to beat Park Place Christian Academy 4-2 at the Battle on the River tournament at Sports Force Parks.

The game was shortened to five innings because of the tournament’s 90-minute time limit.

Kendrick Bershell went 2-for-2 with two stolen bases and two runs scored, Kentrez Bershell hit an RBI triple, and the Gators (4-1) had five stolen bases — three of which led to runs.

“Those guys came out and worked hard for us. They did exactly what we asked them to do. They were real aggressive early on,” Vicksburg coach Antonio Calvin said.

The star of the game for the Gators was eighth-grade pitcher Chris Green. He entered in the second inning when starter Terrance Johnson left with an injury and pitched three strong innings to earn the win.

Green allowed two hits and two runs, only walked one batter, and struck out four.

Both runs came in the third inning. Jacob Summers drew a leadoff walk and Zac Sewell followed with an RBI triple to right field on a well-executed hit-and-run play. The ball went right to the spot vacated by VHS second baseman Rod McCroy, who broke toward the bag to cover the steal attempt, and rolled to the fence.

Sewell then scored on a sacrifice fly by Brady Cruthirds, and Green wound up retiring the last six batters he faced. In all, he retired nine of 12 after rushing to get ready one batter into the second inning.

“Chris did amazing,” Calvin said. “The kid works really hard, he never complains, he’s always there on time. This kid’s a dog. The future’s bright for this kid. For him to throw so hard and be so young, we’re really proud of him.”

Vicksburg got most of its runs in the first inning. Derrick Brown singled and scored on a double steal, and Kendrick Bershell scored on a wild pitch. After a single by Dylan Whitfield, Kentrez Bershell tripled him in to make it 3-0.

The other run came in the third inning. Kendrick Bershell led off with a single, stole second and went to third on a throwing error. He then scored when Tyler Sanders beat out an infield hit.

Sanders went 1-for-2 at the plate and also pitched one inning of scoreless relief to earn a save.

That was enough for Theriot, who scattered four hits, walked none and struck out seven. He did not allow a run until the bottom of the sixth inning.