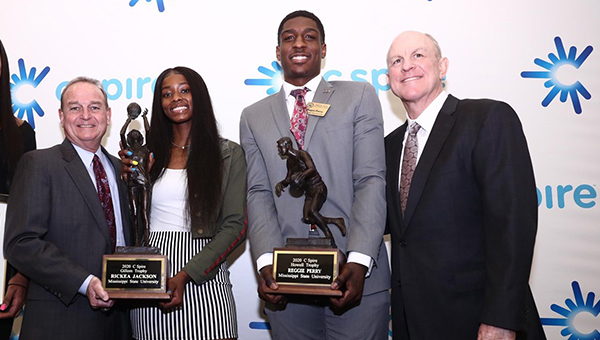 JACKSON — For the third year in a row, Mississippi State can claim to have the best college basketball players in Mississippi.

It’s the third year in a row that a Bulldog has won the Howell Trophy, and the fifth consecutive year that one has won the Gillom.

Perry has collected an SEC-leading 17 double-doubles this season, including 13 in his last 20 games. The last Mississippi State player to average a double-double for the season was Arnett Moultrie in 2011-12.

Perry’s efforts helped the Bulldogs (20-11) finish fourth in the SEC regular-season standings and earn a double bye in the conference tournament. They won’t play until the quarterfinals on Friday afternoon, against either Florida, Georgia or Ole Miss.

Jackson, meanwhile, has scored in double figures in 23 games, and has shot 50 percent or better from the field 15 times. The three-time SEC Freshman of the Week has notched four double-doubles this year, including two in the SEC Tournament. The Bulldogs reached the championship game before losing 76-62 to South Carolina on Sunday.

Jackson was the only freshman to earn SEC All-Tournament Team recognition after averaging 20.3 points and 8.3 rebounds.