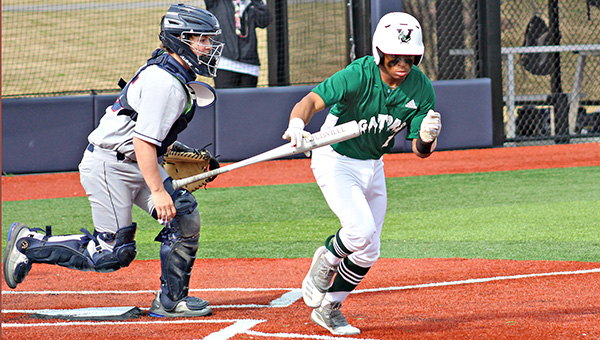 Vicksburg High’s Ryan Thompson tosses his bat aside after laying down a successful squeeze bunt Tuesday against Leake Academy. Thompson had two RBIs in the game, but Vicksburg lost 11-5. (Ernest Bowker/The Vicksburg Post)

No matter how hard they tried, the Vicksburg Gators never could get back the step they lost at the starting line Tuesday morning.

Thomas Cheatham went 3-for-3 with a triple, double, two RBIs and two runs scored, Rhett Atkinson drove in two runs, and Leake Academy scored in every inning as it beat the Gators 11-5 at the Battle on the River spring break baseball tournament at Sports Force Parks.

The game was called in the bottom of the fourth inning because of a 90-minute tournament time limit.

“We’re getting better every game, but this game right here we just got outhit,” Vicksburg coach Antonio Calvin said. “They didn’t miss two-strike pitches. Those guys fought hard and they put those two-strike pitches in play. That was the difference between us and them. When we had two strikes, sometimes we put it in play and sometimes we didn’t.”

Vicksburg (4-2) scored in each of the first three innings, but just couldn’t keep up with Leake. The Rebels scored three runs in the bottom of the first inning, four in the second, and two each in the third and fourth.

Leake not only stayed ahead of the Gators, they did most of it by beating them with their own brand of small ball tactics, aggressive baserunning and timely hitting.

Leake scored three runs on wild pitches or passed balls. Five were scored with two outs. Several key hits, including an RBI double by Atkinson in the first inning, came on two-strike pitches.

“Those mistakes early on hurt, because they made us pay for those mistakes. If we don’t have some of those passed balls, then they don’t score three of those runs and this is a different game,” Calvin said. “We got some unfortunate breaks as well, with some calls we thought should have gone the other way, but we can’t control that. We can only control the things we can control, and the passed balls are one of the things that we can control.”

The Gators were outhit 10-5, but did have some offensive highlights of their own. Ryan Thompson drove in two runs, with a squeeze bunt in the second inning and a groundout in the third. Tyler Sanders doubled and scored two runs, and all nine starters reached base at least once.

A couple of baserunning mistakes cost them valuable outs, however, and kept productive innings from turning into big ones.

“It’s the same game we play, and they beat us at our own game today,” Calvin said. “That’s all right. Every game we go out, we’re getting better and better. It’s only a matter of time before we’re able to put together a string of complete games.”

Although frustrated by the loss, Calvin said he was happy with the way the overall arc of the season has gone so far. The Gators have one more game in the Battle on the River, Tuesday at 5 p.m. against St. Aloysius, and then will have a week to rest and prepare for their Region 4-5A opener against Callaway.

“We’re excited. We’re really encouraged by the fact that we’re getting better every time we go out,” Calvin said. “These guys are learning. They’re growing. A lot of our guys have not played a lot of baseball, so we’re trying to circumvent that with knowledge, understanding and patience. We have to be really patient and let these guys develop and mature as the season goes along.”