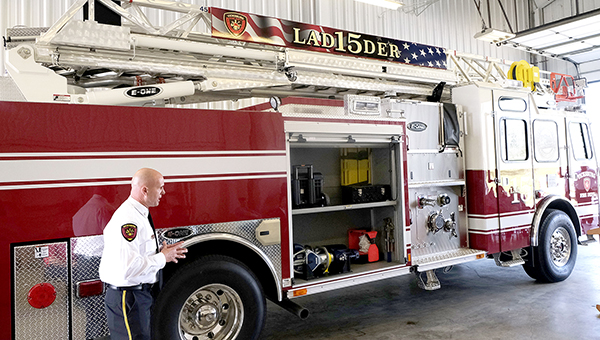 The Vicksburg Fire Department’s newest piece of equipment was introduced to the public Tuesday in a brief ceremony at the department’s Station 5 off U.S. 61 South.

Ladder 15 is the department’s second E-ONE “Typhoon” truck; the first is stationed at Station 3 on Berryman Road. Both trucks feature a 78-foot aerial, a pump capable of pumping 2,000-gallons per minute and can accommodate up to five firefighters.

“Ladder 15 will respond to a variety of emergencies, including residential and commercial fires, medical emergencies, motor vehicle collisions and other service calls,” Vicksburg Fire Chief Craig Danczyk said. “We hope to get 25 years out of this truck.”

He said the truck replaces a pumper bought in 2016, which has been transferred to Station 2 on Indiana Avenue. “This was part of a long-term plan five years ago,” he said.

“There are a lot of small things that make this truck stand out,” Danczyk said, highlighting storage space in its front bumper for 400-feet of hose, LED lighting on the front and sides and rear of the truck and a pair of Jaws of Life.

Danczyk said the front hose storage “is one of the coolest features on this truck. It doesn’t matter if you’re tall or short, it’s easy to load and unload. Firefighters love this concept. I think it actually speeds up laying your attack lines out.”

Mayor George Flaggs Jr. said the truck is part of the city’s goal to make sure firefighters have the best equipment.

“This is how you create an atmosphere of safety and protection,” Flaggs said.