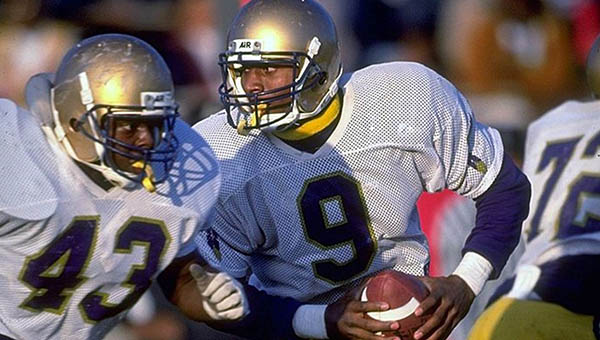 Alcorn State quarterback Steve McNair (9) was one of 17 players and two coaches selected to the College Football Hall of Fame’s Class of 2020 on Wednesday. (Alcorn State Athletics)

Former Alcorn quarterback Steve McNair was among 17 players and two coaches selected to the National Football Foundation’s College Hall of Fame on Wednesday.

The Class of 2020 will be inducted at a banquet in New York City on Dec. 8. The College Football Hall of Fame is located in Atlanta.

McNair is the first Alcorn State player selected to the Hall of Fame. Former Braves coach Marino Casem was inducted in 2003.

McNair rewrote the Football Championship Subdivision and Alcorn school record books en route to winning the 1994 Walter Payton Award as the best player in the FCS. He finished third in the Heisman Trophy voting that season, which is tied for the best finish ever by an FCS player.

McNair remains the all-time total yards leader in FCS history with 16,823, and his 14,496 passing yards were a national record until 2018. He also owns school records for career completions (958) and touchdown passes (119), among a host of other records.

The Houston Oilers selected McNair with the third overall pick in the 1995 NFL draft, and he led the franchise to the Super Bowl in 1999 after it moved to Nashville and became the Tennessee Titans.

McNair was selected to three Pro Bowls during a 13-year NFL career with Houston/Tennessee and Baltimore, and was the league’s co-MVP in 2003.

The other members of the College Football Hall of Fame’s Class of 2020 were: