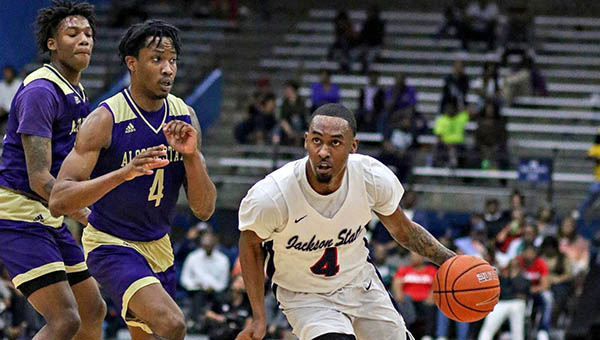 When they were paired against each other, however, the difference was vast.

Roland Griffin scored 13 of his 19 points in the first half and fourth-seeded Jackson State led wire-to-wire in beating No. 5 Alcorn State 69-48 in the SWAC Tournament quarterfinals on Tuesday.

Jackson State (15-17) won all three meetings between the teams this season by double digits. It led for all but 27 seconds of Tuesday’s game.

Griffin averaged 23 points, 10 rebuounds and 3.3 assists in the three games against the Braves.

Jackson State advanced to the SWAC semifinals and will face top-seeded Prairie View A&M Friday at 2:30 p.m. in Birmingham, Ala.

Prairie View beat Alabama A&M 82-60 in another quarterfinal on Tuesday.

Alcorn State (15-15) had its season end with Tuesday’s loss to its archrival. The Braves have not won the SWAC championship and its automatic bid to the NCAA Tournament since the 2001-02 season.

“For me, I don’t decompress. It kills me until I get a chance to get on the court and coach again. Whether it’s coaching at practice or getting out and recruiting, my mind will be on whatever is going on, but there won’t be any decompressing. True competitors want to fight, play and win,” Robinson said.

The Braves led the league in scoring in the regular season, but were well-below their average of 75.8 points per game.

“Our normal flow and cohesiveness was just off,” Robinson said. “We didn’t have any continuity. There were no drive and kicks, there wasn’t much scoring in transition and we just could never get into our flow. We were at a stand-still most of the night and it was disappointing.”

“I gave it my all. I put everything I had into it. We just came out short tonight. We didn’t come to play, and they outplayed us and outworked us, and it showed,” Howard said.