Vikings try to find their groove on the Coast 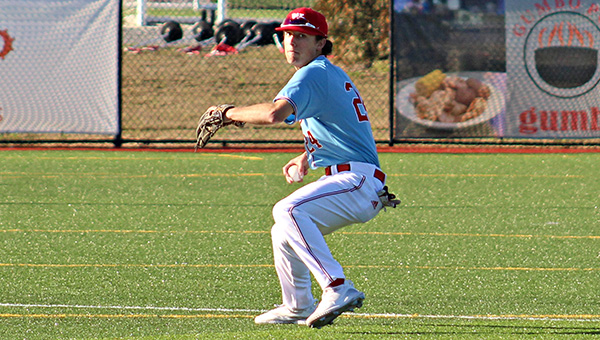 Warren Central will spend part of its spring break visiting with an old friend. It’s hoping to spend most of the time getting back into old habits, though.

The Vikings will head to the Coast this week for four games at the Battle at the Beach spring break tournament. The first is against Long Beach, which is led by their former coach of seven years Conner Douglas, on Wednesday. New coach Randy Broome, however, said he’s more looking forward to seeing his team snap out of an early-season slump that led to five losses in the first seven games.

The Vikings won in their last outing, 5-2 against Brookhaven Academy on Saturday.

“It’s going to be fun. It’s going to be good to see (Douglas) again,” Broome said. “But at the end of the day that’s just another game on the schedule that you have to show up, hustle and compete, and be a good teammate for seven (innings). If we can get that in our head of competing for every pitch and playing the game of baseball, I think things will turn around for us.”

Warren Central (3-5) has won 20 games or more in each of the past two seasons, but struggled getting out of the gate in 2020. It has allowed 10 runs or more in four of its five losses, and been held to one run in three of them.

Errors on defense — the Vikings are averaging two per game and allowed 15 unearned runs — and a lack of timely hitting have been the biggest culprits. In an 11-1 loss to Jackson Prep last week, they left 10 runners on base, left the bases loaded twice, and did not score until the bottom of the seventh inning.

Warren Central is hitting .242 as a team, 100 points below last season’s average.

“We’re getting close. There’s been a lot of flips and changes in there. We’ve got some guys that are swinging it well right now. We had an MRA game that ended like this. We had nine or 10 hits, we’d get them on and get them over and we just couldn’t get that one to get them in. We shouldn’t be making it so difficult on us,” Broome said.

Another factor in the early-season struggles has been a difficult schedule that reads like a who’s who of Mississippi and Alabama baseball. That won’t change, either, even when the Vikings eventually find their groove on the field.

Long Beach (7-3) is off to a fast start under Douglas. After that, they’ll play Class 6A Ocean Springs and Class 3A power Houston. Mixed in is a game against Second Baptist, a team from Dallas, Texas.

On the other side of spring break, four Region 4-6A games against Clinton and Madison Central await in a 10-day span.

Broome said the rough road ahead means the clock is ticking for the Vikings to solve their issues.

“That’s about our halfway point. And the kicker is, the real grind comes after that week when it’s Clinton-Clinton, Madison-Madison, with a Brandon and Ridgeland thrown in,” Broome said. “The next eight-, nine-game span is pretty huge. Hopefully we’ll have some things figured out. Hopefully we’ll have some guys getting comfortable on the mound and giving us a chance to compete.”

On the bright side, Broome noted, one of Warren Central’s three wins came against region opponent Murrah. There’s also plenty of baseball still to be played, and plenty of chances to turn things around.

“We’re going to keep grinding. That’s all we can do,” Broome said. “It’s not how you start, it’s how you finish. This team’s got a chance to finish strong. We’ve got guys here that can do it. We’ve got to start seeing it.”