High school sports will go on — for now 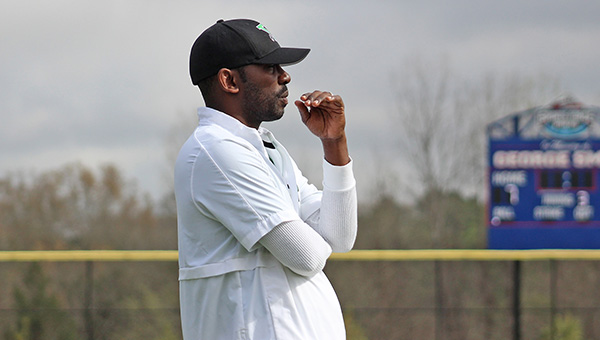 Vicksburg High baseball coach Antonio Calvin looks toward home plate during Tuesday’s game against Leake Academy. The MHSAA and MAIS announced Thursday that they will continue competition in high school spring sports while many college and pro leagues are shutting down over concerns about the spread of coronavirus. (Ernest Bowker/The Vicksburg Post)

While college and pro sports shut down en masse on Thursday over concerns about the coronavirus, high school sports in Mississippi will continue on — at least for now.

The Mississippi High School Activities Association, Mid-South Association of Independent Schools, and athletic directors at Warren County’s four high schools said they will continue to monitor the situation before making a decision on whether to cancel games and competitions, or restrict fan attendance.

“This is a time where we need to make difficult choices to protect our community. Recognizing this, the MHSAA will be working to decide when the risks of communities gathering for sports outweighs the benefits, and take appropriate steps to protect our member institutions,” Brent Smith, Chairman of the MHSAA Sports Medicine Advisory Committee, said in a statement. “We will communicate with you regularly about statewide plans for how to conduct our school activities. We ask that you take these recommendations seriously and partner with us to help protect our most valuable asset, the people that participate in, support, and attend MHSAA events.”

In a span of 24 hours from Wednesday afternoon to Thursday, most Division I college conferences canceled their men’s and women’s basketball tournaments and eventually put all spring sports on hiatus until at least March 30.

Late Thursday afternoon, the NCAA announced it is canceling its basketball tournaments and all other winter and spring sports championships.

The Southeastern Conference, Conference USA and Southwestern Athletic Conference all suspended competition until at least March 30.

MHSAA executive director Don Hinton said his association often follows the lead of college conferences on such matters. While the MHSAA has not yet suspended competition, Hinton did not rule out taking similar measures.

“We’re looking at it on an hour by hour basis,” Hinton said. “If we have to cancel games or limit attendance, we’ll do that in stages and respond as it occurs on a daily basis.”

The Mississippi Department of Health recommended Thursday that gatherings and events be limited to no more than 250 people. Vicksburg Warren School District spokesperson Christi Kilroy said the district would follow those guidelines for all school functions including athletics.

In a statement, the MAIS said it is not recommending that classes be canceled, but that its member schools should consider canceling or postponing such events.

As far as sports, the MAIS said its member schools may postpone any game at their discretion. Playoffs and championship events will be reviewed as the situation evolves, and a staged response of limiting fans and postponing games will be used.

“Spring activities and sports championship events will be reviewed and appropriate responses and actions will be taken. If contingency playoff formats are required, we appreciate your school’s flexibility and understanding,” The MAIS statement read. “We will do everything possible to complete championship competition as scheduled, but contingency plans with modified championship formats may be necessary.”

Most Mississippi schools are out of session this week for spring break, although athletic events are being played.

Porter’s Chapel Academy, St. Aloysius, Vicksburg High and 14 other baseball teams played in a tournament at Sports Force Parks in Vicksburg that concluded on Wednesday.

“It’s very scary and nerve-wracking for kids and the state and the nation,” VWSD athletic director Preston Nailor said. “As a local school district, we’ll do what’s best for our kids.”

Athletic directors Mike Jones of St. Al and Wade Patrick of Porter’s Chapel said they, too, would abide by whatever the MAIS decides.

Jones and Patrick also said there has not been formal discussion among their schools’ respective administrations about the issue, as it pertains to sports, because of spring break.

“We haven’t discussed anything or seen anything from the MAIS. Being out, we haven’t had that discussion as a school, either,” Patrick said. “I would think we would follow whatever the MAIS sets. That’s our governing body.”

Patrick added that with most schools being out of session, including his, and many officials out of town or scattered, it was difficult to coordinate a plan. He expected to meet with other administrators when classes return on Monday.

“Your communication isn’t there,” Patrick said. “You can call and talk, but it’s always easier when everybody is in one location and can put their heads together. When you’ve got people in different places like now, that’s hard.”

The youth baseball and softball seasons for the Vicksburg Warren Athletic Association and Vicksburg Girls Softball Association are scheduled to begin next week.

City of Vicksburg Parks and Recreation director Joe Graves said it was up to each organiztion to decide whether to postpone games, but he and the city would make recommendations based on available information.

“Nothing right now with the city has been canceled,” Graves said. “The VWAA and VGSA boards will decide what they do with their own leagues. By next week we might have a completely different answer.”

VWAA president Matt Mallard said most of the crowds at his organization’s games do not reach the 250-person threshold to consider cancellation and didn’t anticipate canceling any games or practices.

Sports Force Parks, where the VWAA and local high school teams play, has sanitized its facilities and remains open.

Mallard said the VWAA will follow guidelines passed down by the USSSA sanctioning body about limiting non-essential contact such as high fives and postgame handshakes.

“We don’t want it to be a problem, but if it shows that it’s going to be a problem we’re not blind. We’re all moms and dads out here. We’re going to do what best for the kids,” Mallard said.