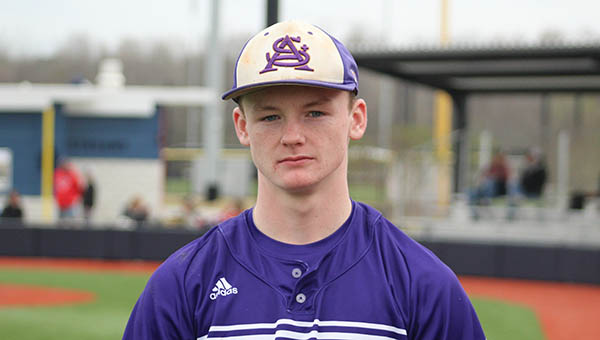 St. Aloysius baseball player Brandon Steed went 3-for-6 with a double and three RBIs in a split doubleheader against Starkville Academy and Natchez on Thursday.

OCEAN SPRINGS — On a day where chaos reigned in the sports world, St. Aloysius’ baseball team provided a bit of normalcy just by taking the field.

The Flashes played two games Thursday at the Battle on the Coast spring break tournament, beating Natchez 11-3 and losing to Starkville Academy 8-7. The high school baseball tournament was one of the few sporting events to go on in Mississippi as college and pro leagues canceled tournaments and postponed their seasons over concerns about the coronavirus.

St. Al is scheduled to play one more game in the tournament, Friday at 9:30 a.m. against Houston at Biloxi High School.

In the first game Thursday, Starkville Academy scored three runs in the top of the sixth to grab the lead, and then held off a St. Al rally in the bottom of the inning.

The Flashes scored twice in the bottom of the sixth, cutting the deficit to 8-7 when Brandon Steed was hit by a pitch with the bases loaded. Haden Luke hit into a game-ending fielder’s choice, however, and Starkville escaped.

Steed and Ethan Parmegiani each drove in two runs for St. Al. Kieran Theriot went 2-for-3 with one RBI and two runs scored. Wes Warnock and Thomas Phillips also scored twice each.

In the second game of their split doubleheader, the Flashes erupted for six runs in the fourth inning and cruised past Natchez.

Lane Hubbard pitched a five-inning complete game for St. Al. He allowed four hits, walked none and struck out three.

Davenport’s home run in the fifth inning put the Vikings ahead 7-2 and gave them some needed separation in a close game.

Kyle Dupree had two hits and scored a run for the Vikings, and Clayton Thurman scored twice.

Long Beach 2, Warren Central 1
Long Beach pitcher Kobe Cook struck out eight batters in a complete-game three-hitter, and the Bearcats beat Warren Central in the Battle on the Coast tournament.

Warren Central pitcher Clayton Thurman also had a strong outing. He went six innings, allowed two runs on six hits, did not walk a batter and struck out three. Long Beach touched him for unearned runs in the second and fourth innings, however, to go ahead 2-0.

Warren Central finally scored in the sixth when Shayne Ragan doubled and pinch-runner Bo Broome scored on a groundout by Alan Kivett. The Vikings put the tying run on base in the seventh, when Floyd Davenport hit a two-out single, but he was stranded there.