Stations of the Cross: ‘Take up your cross and follow me’ 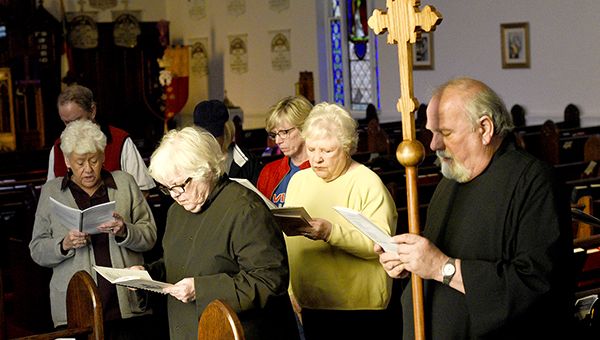 Members of Christ Episcopal Church participate in the Stations of The Cross led by Officiant Nancy Curtis and Crucifer Jim Miller in this file photograph from March 2019.(Courtland Wells/The Vicksburg Post)

With the start of the Lenten season, many Christians participate in a unique seasonal custom to help them further prepare for Easter by reliving Christ’s suffering and death on the cross.

The practice began in the Middle Ages, when Christians on pilgrimage to Jerusalem retraced Christ’s journey to Calvary, stopping at various locations along the way for reflection, prayer and meditation.

The devotion later spread to churches in Europe, where a series of 14 images or small crosses were placed on church walls and people would walk from station to station to pray and reflect on the place the image or cross represented.

Both the Catholic Church and the Episcopal Church have Stations of the Cross.

The importance of the stations, said the Rev. Rusty Vincent, pastor of St. Paul Catholic Church, “Is that it’s us carrying the cross with Christ.

“Like it says in the scriptures, ‘You must deny yourself and take up your cross and follow me.’ This follows the command.”

During the Stations of the Cross, he said, participants pick up the cross with Christ and carry it with Him throughout the stations to show their unity with Christ, their suffering with Him “and hopefully our redemption with Christ as well.”

Vincent, who has done the Stations of the Cross in Jerusalem, said the stations there “is a fairly lengthy distance in walking it. It’s a cobblestone road and several hills. It’s very different because it ends on the hill in the exact spot (where Christ was crucified).

“Here, you follow the stations and you kind of walk with Him,” he said. “In Jerusalem, you actually take the steps, but the stations are exactly the same. We pray here exactly what they pray there.”

Vincent said the reason he includes the 15th Station is it brings the Stations of the Cross “full circle.

“The cross is important and that’s definitely our focus during Lent and death, but doing the 15th Station and the resurrection brings out that hope we have so all of our penances during Lent and all the practices that we’re doing during Lent — there’s hope for it; for eternal life.”

“Everyone who desires and is able follows around (the stations),” he said. “For the most part everybody follows around. The church is open, and anyone who wishes can join us.”

The physical movement from station to station, he said, “In a way, brings it (the passion) closer to you. We talk in the church about a sacrament being an outward and visible sign of an inward and spiritual grace.

“The same way we use water for baptism and bread and wine for Communion, in a sense, that’s what the stations do for us. It gives us a physical movement and something to actually look at when we are hearing the story of the passion again.”

Godfrey said the Stations of the Cross inside the church were painted by church member Phyllis Blake. The stations are held every Friday at 5:30 p.m.

“And here in the late evening with the sun coming through the stained glass, it just really makes it special,” he added.

Godfrey said the last stations are held the Friday before Palm Sunday in the church garden.

“We have a different set of images and the version we use, there is one written by a Catholic priest, Jeff Bayhi, and sung by Aaron Neville. That’s a particularly moving piece, and there are several different versions here that we use. One of them is from the viewpoint of Mary.”

St. Paul has Stations of the Cross every Friday in Lent at 5:30 p.m. at the church.

Unlike Christ Episcopal, St. Paul has Stations of the Cross on Good Friday.

“On Good Friday, we do stations at 3 o’clock which is the time that we recognize as Jesus’ death,” he said.

“Just being there on the afternoon, just being in the mindset of when Christ died, doing it at the time he died, as well, really puts some profound meaning to it especially when you get to the 12th Station, when it says, ‘Jesus dies on the cross.’

It takes a very solemn meaning to it for that moment.”