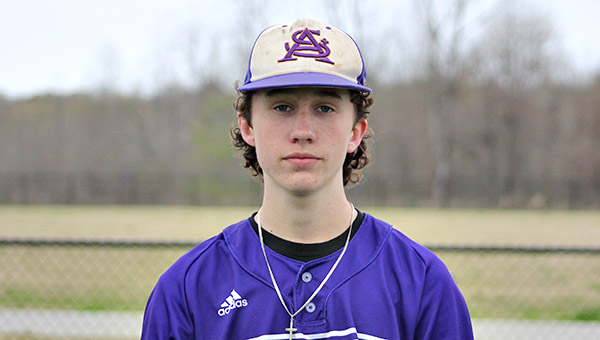 St. Aloysius baseball player Carter Magee drove in the go-ahead run with a sixth-inning single in a 3-2 win over Houston on Friday.

BILOXI — A strong performance by their pitching staff and a late rally propelled the St. Aloysius Flashes to a baseball victory Friday.

Three pitchers combined to allow one run, and Carter Magee drove in the go-ahead run with a single in the top of the sixth inning to lead St. Al to a 3-2 victory over Houston at the Battle on the Coast tournament.

St. Al (7-2) won two of its three games in the tournament, and four of five this week on the Coast and at the Battle on the River tournament in Vicksburg.

Wes Warnock drove in two runs with a third-inning single for the Flashes. Houston tied it with a pair of runs in the fifth, and then St. Al (7-2) mounted the winning rally in the sixth.

Haden Luke led off the sixth inning with a single, was bunted to second, and then scored on Magee’s base hit to center field.

Kieran Theriot pitched out of a two-on, two-out jam in the bottom of the sixth, and then worked around a leadoff single in the seventh to earn a save. Conner Paxton pitched one inning of scoreless relief for the win.

Houston 7, Warren Central 1
Eli Hancock went 2-for-3 with a double, one RBI and one run scored, and Brandon Allen doubled and scored two runs to lead Houston past Warren Central on Friday.
Houston jumped on the Vikings for three runs in the first inning and three more in the fourth to open a 6-1 lead.

Clayton Thurman and Braxton McCurley each had two hits for Warren Central (4-8). McCurley singled and scored on a passed ball in the second inning for the Vikings’ only run.

Warren Central went 1-3 at the Battle on the Coast tournament. It lost two games to Long Beach and Ocean Springs by 2-1 scores, but scored a total of three runs in its three losses.

Warren Central is scheduled to play on the road at Region 4-6A rival Clinton on Tuesday night.