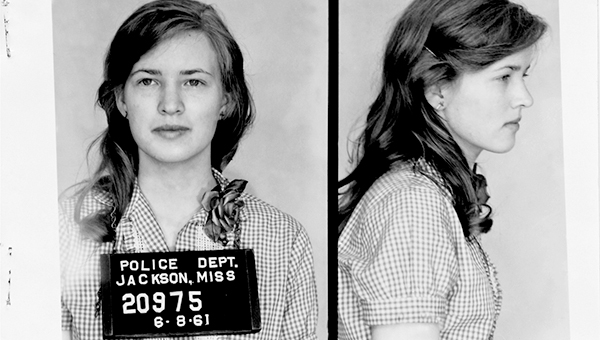 In 1961, Joan Trumpauer Mulholland was arrested in Jackson, Mississippi.

As a Freedom Rider, she had participated in a sit-in that was held in a whites-only waiting room located in the capital city.

“She is a national icon and known to many people,” Grace Brown said.

Brown is the chairman of the Delta Sigma Theta Sorority, Inc. Founders Day Program, and on Sunday, beginning at 3 p.m. at the Vicksburg Auditorium, Mulholland will be the guest speaker at the sorority’s Founder Event.

Mulholland had been 20-years-old at the time of her arrest and spent 10 days in a Mississippi jail before ending up at Parchman prison in cell 14 on death row, Brown said.

Mulholland and the other Riders who were taken to Parchman had refused bail and remained at the penitentiary for two months before being released.

Timeline.com states, busing the Freedom Riders to Parchman had been an attempt by then Gov. Ross Barnett to intimidate, not only those who had been taken to the prison but also other Riders who were planning to come to Mississippi.

The governor’s plan failed and that summer more than 400 Freedom Riders arrived in the south.

Brown noted Mulholland can even be seen in a historical photograph.

“In the center of the picture, she is the white lady where they are pouring the mustard and ketchup on her head,” she said.

Lisa Johnson, who is the assistant treasurer of the sorority, said,  Delta Sigma Theta was founded in 1913 by 22 women on the campus of Howard University

“It is an organization of college-educated women committed to the constructive development of its members and to public service with a primary focus on the Black community,” Johnson said, adding, “The sorority currently has 1,000 collegiate and alumnae chapters, which are located in the U.S., Canada, Japan, Germany, the Virgin Islands, Bermuda, the Bahamas, Jamaica and the Republic of Korea.”

Loretta Brantley, who is the president of the local sorority, said she is excited to have the opportunity to celebrate Mulholland.

“She was a true part of the Civil Rights Movement and we want to celebrate all she has done,” Brantley said.

The theme for Sunday’s event is “Building on the Foundation of the 22,” which is representative of the sorority’s 22 founding members.

Admission is $50 and includes a catered meal.

Tickets will also be available at the door.

“This is an open event and the public is invited,” Brown said.

In addition to celebrating the sorority’s 107th anniversary,   Brown said, “We are excited she (Mulholland) will be here, and we want the community to know about the work she has done in Mississippi.”

“And we want the community to be a part of it,”  Brantley added.