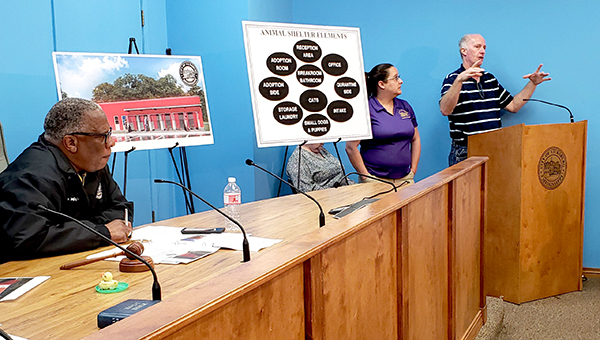 Officials with the city of Vicksburg update the public Thursday evenings on the city's plans for a new animal shelter. Mayor George Flaggs Jr. announces at the meeting the city was now looking at purchasing property on Oak Street for the new shelter. (John Surratt/The Vicksburg Post)

Flanked by two artist’s renderings of the proposed shelter, Flaggs told the estimated 40 people attending the second meeting on the shelter, “I’m building an animal shelter for Vicksburg.” He set another meeting for April 16 at 5:30 p.m. to review the shelter’s floor plan, which was not available Thursday.

The Thursday meeting followed a Feb. 18 meeting in which Flaggs told residents he would present a site recommendation March 12 with plans to finance and build a new shelter.

Feb. 21, the mayor, other city officials and Marilyn Terry, who provided a recommendation for a shelter building, toured two potential sites for a new shelter.

The group visited the former U.S. Rubber Reclaiming plant off U.S. 61 South, which is owned by the city and located in a flood zone, and the 1.5-acre site in the 2100 block of Oak Street south of Depot Street.

Terry, who is organizing a nonprofit corporation, Friends of the City of Vicksburg Animal Shelter, to support the shelter, said she is moving to get a 501c(3) designation for the organization and raise the property’s $60,000 price, buy it and donate it to the city.

She called the Oak Street property “a fabulous location,” and a “perfect fit” for the shelter.

“This is going to be an asset,” Terry said. “We can have a really nice place.”

She said the Friends group will work with the city as an independent organization.

“We will raise funds and make things happen at the shelter that need to happen and the city shouldn’t really be responsible for,” she said. “Extra things for the animals and fundraisers.”

Plans for the new shelter envision a 5,000-square-foot building with a quarantine area for sick animals and puppies, intake area where the animals will be examined, an adoption room where animals can spend time with the person adopting them, cat room and a small dog/puppies room and outside access.

City officials have been considering a new animal shelter for several years. The present shelter is almost 50 years old and sits on a tract of land on Old Mill Road adjacent to the Vicksburg Fire Department’s training center.