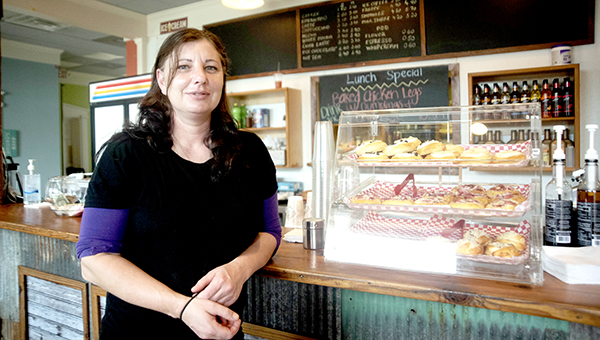 Sweet treats are once again being offered in downtown Vicksburg.

John and Nadia Miller, former owners of Caffé Paradiso, have returned to the United States, and on Saturday, they returned to the Vicksburg business community as they opened Bohemia Café and Bakery on Washington Street.

Opening in the location that was once the Mad Baker, the café and bakery will offer baked goods, breads and a breakfast and lunch menu. The breakfast menu will include scrambled eggs, sausage, ham and cheese omelets, crêpes and biscuits.

The lunch menu will include “some standards,” John said, which include grilled cheese sandwiches, hamburgers, cheeseburgers and grilled chicken.

Breakfast will be served from 7-to-10 a.m. daily and the bakery will feature daily lunch specials from 11 a.m. to 3 p.m.

“Nadia is definitely excited about opening the bakery,” John said. She has wanted to have her own bakery since we had the coffee shop. So when we moved back and saw the bakery downtown had closed, we decided to go for it.”

As for baked goods, Nadia will be making cupcakes, cakes, Danishes, cinnamon rolls, muffins and a variety of breads. Special orders will also be available.

“You can call in and place orders that will be made outside of her (Nadia’s) normal inventory,” John said.

Flavored coffees will be for sale, and on Saturdays, the bakery will offer beignets.

“We are calling it beignet Saturday,” John said. “We are only going to do beignets once a week because of the way she makes them, it is a great deal of effort, so it pretty much takes the day.”

Originally from the Czech Republic, John said Nadia made her way to the U.S. 18 years ago and has exemplified the “all-American success story” while living here.

A friend had asked Nadia if she wanted to go to the U.S. for a while, John said. After telling her friend yes, Nadia arrived in the states with $300 dollars and a backpack with clothes. “And she couldn’t speak English,” he said.

Miller said his wife has always loved to bake.

“Her first job when she was young and living in the Czech Republic was at a bakery,” John said.

Though Nadia has never had any formal culinary training, John said, she has worked with many European bakers.

The couple sold Caffé Paradiso to return to Nadia’s home country, he said, for medical reasons.

While in the Czech Republic, John said Nadia began working with a baker who made breads and pastries for bed and breakfast homes and a farmer’s market store.

The Bohemia Café and Bakery is located at 1119 Washington St. and is open Mondays through Saturdays from 7 a.m. to 3 p.m.