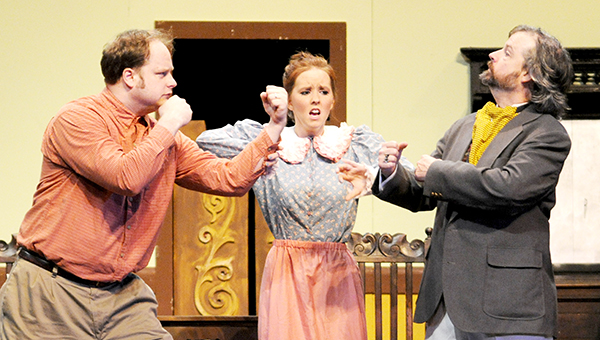 Actors take part in a performance of the iconic “Gold in the Hills” during a show in March 2019. Due to threats caused by the COVID-19 virus, officials with the Vicksburg Theatre Guild canceled the scheduled performances this past spring. (Courtland Wells/The Vicksburg Post)

Like the theaters on Broadway, the Parkside Playhouse Theatre has gone dark for the upcoming performances of “Gold in the Hills.”

Paul Ballard, who is the former president of the Vicksburg Theatre Guild and who is currently in charge of the main stage productions, said the VTG board held a conference call Monday night in light of the coronavirus outbreak. During that call, board members approved canceling all spring productions of the iconic melodrama.

“There were a couple of factors that went into our decision,” Ballard said, the age of several cast members and President Trump’s suggestion to not exceed 10 or more people in a group. While audience members could have been spread across the 250 seats in the theater, Ballard said, there would not be enough distancing for cast members on the stage.

Ballard said this is not the first time the performances of the melodrama have been canceled. In 1942, during WWII a whole season was canceled, he said.

“Gold in the Hills” is in the Guinness Book of World Records for the longest-running show, however, the spring season being canceled will not affect the melodrama’s standing.

“As long as one show a year is performed, it still counts,” Ballard said, so we will keep on with our record.

Set in the 1890s, “Gold in the Hills” includes a hero, heroine and villain and features sing-along musical numbers.

Performances are held each March and July at the Parkside Playhouse Theatre on Iowa Boulevard.

First staged on a U.S. Army Corps of Engineers barge on the Mississippi River, the show then moved to the retired steam-powered Sprague towboat that was anchored along the river.

After the Sprague was destroyed by a fire in 1974, productions continued at a local church until the theater was built in 1978.

Fortunately, Ballard said, the royalties that had already been paid for the upcoming performances will be able to roll over for the summer performances.

As for the VTG’s last remaining 2020 main stage performance, which is set to open in May, no determination has been made if the show will go on.