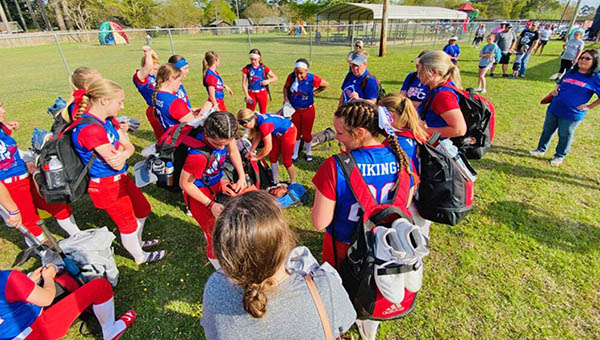 Warren Central softball players pack up their bags after Saturday’s games in the Brookhaven Tournament. The tournament was one of the last high school sports events in Mississippi before the MHSAA and MAIS both suspended competition because of the coronavirus outbreak. (Tim Reeves/The Vicksburg Post)

A surreal feeling hung over Brookhaven’s Lady Panther Park on Saturday. Next to the field, a fresh flood of news, cancellations and growing concern about the coronavirus pandemic filled people’s phones and conversation.

By the end of the day, when it seemed apparent that these might be the last games anyone plays for a while — perhaps even the rest of the season — the scene shifted from surreal to emotional.

“I just want to go home and cry,” Warren Central senior infielder Kallie Page said, her voice choking up. “It will feel like my heart just got ripped out of my chest. Softball has always been my go-to. Everything I’ve always felt pressures with, I’ve always gone to softball for it. Just to have that taken away is just crazy.”

High school sports in Mississippi soldiered on through the latter part of last week, even as college and pro sports leagues shut down en masse. The Mississippi High School Activities Association did not halt competition until Monday, when it announced all activities were suspended until March 29. The Mississippi Association of Independent Schools announced a one-week suspension on Saturday.

Most schools were out on spring break, and a handful of tournaments continued late into the week. St. Aloysius and Warren Central’s baseball teams both played in the Battle on the Coast tournament that concluded Friday. Warren Central and Vicksburg’s softball teams were in Brookhaven on Saturday for another tournament that became more and more strange as the day wore on.

Vicksburg coach Brian Ellis said he was in between two games of a doubleheader when he got a text message telling him athletics would be shut down at 6 p.m. Saturday.

“When it all started coming about, and the pro leagues and colleges were canceling and were still playing, you didn’t know what to think,” Ellis said. “We’ve never had anything like this happen. It stinks for those kids that are seniors, whose season might be over, and for all of them who worked hard all offseason to get ready and then we got six games in.”

A number of individual school districts — including the Vicksburg Warren School District and most others in the Jackson Metro area — announced closures of at least one week on Saturday. The closures include a cancellation of activities, which means no games or practices.

It’s unclear how long the halt in play will last. There was, however, the sense that competition might not resume this season. For senior players, that meant Saturday’s games could have been their last.

For the record, Vicksburg lost 9-2 to Lawrence County and 16-1 to Bogue Chitto. Warren Central beat Brookhaven 11-3 and Loyd Star 5-2 on Saturday.

Afterward, players from Warren Central and Brookhaven walked past each other without shaking hands, in an effort to uphold tradition while limiting physical contact and the risk of spreading coronavirus.

“Heartbreaking. Especially for my seniors. They’ve been wanting this for so long, and working for this for so long, and all five of them have been playing well. To have to end a season like this because of something out of our control is just heartbreaking for them,” Warren Central coach Dana McGivney said. “Me, as a coach, it sucks. It’s not like they can get another season of eligibility. They’re not college kids. They don’t get that. This is their senior season, and for them to have to leave that, it brings me chills.”

Adding to the disappointment for Warren Central was the potential end of a great season. The Lady Vikes won both of their games Saturday to improve their record to 11-0.

The last time Warren Central won more than 11 games in a season was 2015. It had won a total of 12 the last two years combined. The Lady Vikes have scored at least 10 runs in seven of their 11 games this season and had the look of a contender for the Region 4-6A championship.

Now, those dreams have been put aside by the thought that they might not play again this season.

“We’ve been so consistent and playing hard, and cutting down on our errors, and hitting the ball really well, and just making plays when we need to make plays,” McGivney said. “Whoever we pitch seems to step in and throw, and if I bring somebody else in they’re throwing strikes right behind them. It’s a total team effort, which is what we’ve been preaching all year long. It’s finally coming together, and to have these unknowns, it’s hard.”

McGivney remained hopeful that the season would resume in a few weeks. Although teams can’t hold formal practices while school is closed, she planned to encourage her players to throw and work out at home so they’re ready to pick up where they left off.

“They can’t get together in groups. They have to stay home as much as possible,” McGivney said. “But go in your backyard and throw, hit, do whatever you can as much as possible because I don’t want them to get out of the habit of exercising just to make sure when we get to play again, we’re ready to play and have not just been sitting.”

Ellis felt the same way, but said that it’s difficult to do more than encourage his players to work on their own. Players and coaches are not allowed to come to team facilities during the hiatus.

“They have said the whole purpose of this is to keep the kids at home. Maybe they can get mom and dad out there and play catch, or take dry cuts. They know enough drills to do some things on their own,” Ellis said. “If they don’t throw on their own and that type of stuff, and we just resume the schedule in April, it could cause some arm injuries.”

And if the season does not resume? If Saturday’s games were indeed the season finale?
Page said an undefeated season is not a bad consolation prize.

“It literally feels like we’re a champion,” Page said. “We all have the heart and the love for the game, and we could go further than we did.”