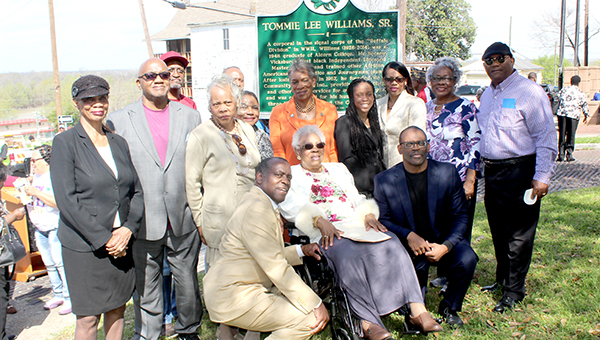 During his life in Vicksburg, Tommie Lee Williams Sr. was known for his work in the community and his efforts through We Care Community Services Inc., which he founded, to help those in need.

Last Thursday, his family, friends and others who knew him gathered at the intersection of Jackson and Walnut streets to dedicate a state historical marker honoring his service to Vicksburg.

“This is awesome,” Williams’s wife, Frances Pearline Williams, said after the ceremony. “This is really something I will cherish for the rest of my life. It’s beautiful.”

Loston said the marker was dedicated one year after she began her efforts to get the marker in 2019. “I can’t believe it,” she said. When she got the letter approving the marker, she said, she went back and checked the paperwork and saw the March 12, 2019 date.

Williams “led with distinction in many different arenas,” Vicksburg Warren School District Trustee Alonzo Stevens said. “He set boundary markers for the blind, for aspiring plumbers and support for the needy. He was the epitome of a concerned citizen.

“As a concerned citizen, he focused on the betterment of our community and the civil rights activity in Mississippi. As a plumber, he set the standard,” Stevens said, explaining how Williams installed the indoor plumbing for the old U.S. Post Office on Crawford Street.

Although Williams lost his sight in 1967, Stevens said, “He gained a vision for helping others,” adding many people with sight “struggled to see and understand how a blind man could accomplish so much in helping mankind.”

“He was a man of distinction; he was a man of accountability,” he said. “He had incredible fortitude, because anytime you had an impairment like he had and did what he’s done, that is something we can take great measure in doing. He paved the way.

“We sometimes complain about everything each and every day,” Denton said. “If we could do half as much as Mr. Williams did, we could set this city, this state, this country, on fire, because the work is out there to be done. It’s evident Mr. Williams’ work speaks for him. Will your work speak for you?”

Loston said her father was full of life.

“He was a true Renaissance man. When we speak about evidence-based practices, there’s clear and compelling evidence he re-invented himself to whatever the issue was at hand,” she said.

Living in a segregated community, she said, her father focused his attention on door-to-door canvassing for school integration, and “sought to ensure that children would have breakfast in public schools,” and worked to have streets paved in the Marcus Bottom and Douglas Park areas.

“This sightless man could see the need for tutoring our children through an after school program, job training, summer youth enrichment programs, housing counseling and GED attainment,” Loston said.

“He deeply cared for this community,” he said. “His actions were motivated by a sincere desire to help others. He loved his family and this community.”

Williams may have lost his sight, Flaggs said, “But he was a visionary; he was determined to make a difference in the world and Vicksburg.”